I went to the east coast for love. Love is an interesting beast. A moving force, like weather. It carried me east, like a strong river. Time and space are movable in the face of love, place is malleable, futures become weighted with sentimentality. Everyone everywhere is having babies. I don’t want to have a baby but I like the idea of babies. A world with babies would make sense, the same way that big gardens and sunlit meadows and swimming holes make sense. Nice things, but who gets to have them? Most people, apparently, live in tall haunted buildings with no yards, the gutters clogged with leaves and Styrofoam cups. Snow falls and covers the trash and the pavement and the dead brown grass in the park and people are happy for a moment, they pull up the hoods of their hoodies and ball their hands into fists and walk around, throwing snowballs at chainlink fences. But babies? Never. On the east coast, I can’t tell if people are more or less unhappy than they are in Portland. With what sort of stick do we measure these things? And isn’t it just one big pot of soup, anyway? Everyone unhappy together on the head of a pin. Rare groves of trees left in remote, unpopular places provide momentary respite for the extremely fortunate. For a few days, while on the east coast, I was in Vermont, at C’s friend Joanna’s house, and we were sitting on a long couch in a room stuffed with woodheat. Outside the snow had been piling up and blowing around, pure and white like cake frosting and fantastically innocent. Beyond the house the frozen road wound four miles into a town of white-washed clapboard buildings that sat on end like cracker boxes. The cold river moved slow, shining and thick. All the world was a wintry eden, stitched together with the strong floss of naivety. I asked Joanna how it was that her parents got to live out there in the country when everyone else, anymore, lived teeming in cities with nary a blade of grass, and of course it was a long and complicated story, the story of how one finds a way to live in the country when there is nothing in the country to live for, when rural everywhere is busted economically and abandoned houses sit moldering and there is no way to spin goat hair into gold or live of burlap sacks of acorns. Nothing is so romantic anymore, or so mechanical. Nothing is analog. The only objects that move through space, these days, are the apples that fall in the abandoned orchard, small and misshapen but still tasting alive, sweet and crisp and, if anyone were there to witness it, perfect. But we have no memory for these things. What are we? Where are we.

We are here. The entire continent is covered in clouds. I know this because I am in a plane above them, looking down, god to the red-blue sunset and the curve of the earth. Oh, the curve of the earth! It takes me right out of the clutter of my brain and reminds me of the simplest equation of all. The earth curves, we are small. The east coast was swept free of clouds when we circled it this afternoon, the pincushion of Manhattan bristling in the cold atlantic wind. Tiny freight barges fought the moon on the open sea, carrying the cumulative product of several thousand years of human civilization. Mass-produced goods. When I first got off the bus in New York my fingers were numb from the cold, Lark wasn’t back in town yet, and the coffee shop that sold tea was closed. Then Sean called me, my friend from Alaska. He was in Brooklyn visiting his family. So I took the subway to his house and we sat on his rumpled twin bed and talked about the Gaia hypothesis and the unraveling of the meta-narrative of the universe. His room smelled like stale cigarettes, just like his cabin in Alaska. He’d moved into a new cabin, he said, with his FTM boyfriend. You’re a fag, I said. No I’m not, he said. Yes you are, I said. You can think that, he said, but I’m not. Well then you’re queer, I said. He was silent for a moment. Not straight, at least?

No, definitely not straight, he said. I asked him how school was going. I’ve barely been going to classes, he said. I’m too smart for school.

Sean begged the car from his sister and took me on a tour of the Dyker Heights Christmas lights, crazy plastic snowmen nativity santa scenes twirling and waving and blinking on and off, crowded into the manicured front lawns of old-money Italian homes. Since he’d been back Sean’s mom had given him shit about his beard, and the fact that he walked around the house without socks. He worried that he’d grown too Alaskan. I fiddled with the radio and he squinted against the traffic lights, glasses lost, and cut back and forth in traffic. “I can’t wait to get pulled over,” he said. “I can’t wait to show the cop my Alaskan ID. I’m going to try and play dumb, like- ‘But officer, we don’t have traffic lights in Alaska!’” By and by he dropped me off at Lark’s place, and I stomped up the worn wooden stairs to her floor.

Lark lives on the opposite end of Brooklyn, near the navy yard, in an industrial building across from an academy for Hassidic boys. On the first floor of her building is a commercial linen service, and the rest has been turned into work-live studios- but not, says Lark, like the fancy decadent ones in Williamsburg, which are, according to her, dark, airless closets that have been outfitted with granite countertops and brushed steel appliances. Lark’s fourth-floor apartment has cinderblock walls and big, old windows that let in more light than even I am used to, back on the Wet Coast in my dim wooden shack. The floor is concrete, and in the back of the space three tiny rooms have been built, each large enough for a twin bed and a bookcase. Lark has built a loft in hers, a nest for her futon and three-foot stack of blankets, and so has doubled the size of the room. Below the loft is her desk, crowded with art supplies, shelves for clothes and books, and her huge window that overlooks the navy yard, around which hang her plants, brought from Greensboro, from the brick house on Mimosa drive where the both of us once lived.

I got to Lark’s house late and she put on the kettle for tea, handed me a glass of tap water and I leaned against the counter, grateful. We were both exhausted, me from eight days of travel and small-talk with strangers and Lark because she’d fallen in love, a love which had driven her to take several thirteen hour Chinatown bus trips to North Carolina and back, from which she’d just returned. She said she hadn’t slept in days, she’d just been fucking and talking and wandering the winter streets of Greensboro, which had been dusted in a rare blanket of new year’s snow. Now her new date was on a plane back to Sweden, where he lived with his seven year-old son, and they wouldn’t see each other again until February. Lark is thinking of moving to Berlin, which is several hundred years closer to Sweden. She likes urban wastes, crumbled cinderblock walls and architectural ruins that go on for miles, all of which can be found in Berlin. It fascinates her endlessly, it fuels her art. Lark and I spent the few days before my flight making fantastically large breakfasts, walking in the cold clear wind, and then coming home to pot tincture and netflix on demand. Ever since I ate pot brownies with C’s family on Christmas, I’ve been on a bit of a drug kick. It’s been fun, this little holiday vacation from sobriety. I get really dumb and time slows down, and everything seems more interesting than it is, with threads of sadness in there too, and then I fall asleep.  My little bender is over now, though. I left the tincture in New York with Lark. I didn’t want to fly with it again. Airport security is ridiculous.

The wet coast! Take me back to the wet coast. To my shack, my bed, my books. Quiet. An idea of home. And love! Ridiculous things, like home and love. Who am I, and what morning did I wake up and find myself suddenly capable of these things? 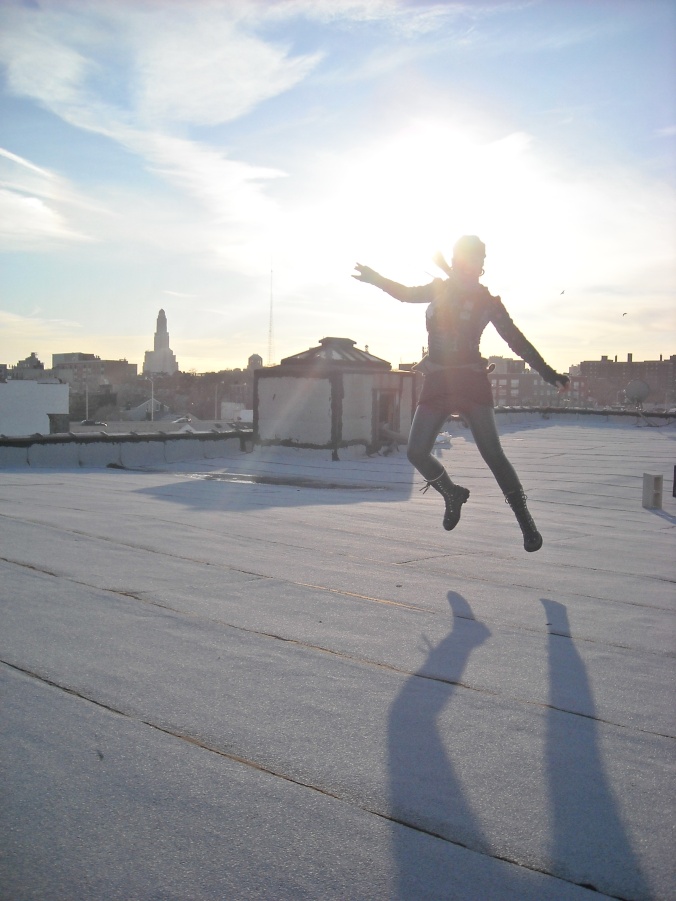 Lark on her rooftop in Brooklyn