I sleep well, more unafraid of bears while camping solo than I perhaps have ever been out here. I think I finally understand why people who do this traverse aren’t concerned about the grizzlies. It’s because of the rivers. Grizzlies are our fuzzy wuzzy best friends compared to these rivers at 4pm during a year with a lot of extra rain.

It’s eleven miles up this tributary to get to the spot on the east fork of the chandalar river where Kirk will pick me up tomorrow. Eleven miles is chill, but what if it’s all tussocks, like yesterday?

It’s not. The walking is some of the easiest I’ve had on this route so far- flat streambank with short monched willows and caribou trails through crispy, well drained tundra. And the tributary I couldn’t cross last night is an entirely different river this morning- silty clear instead of roiling brown, and easy to cross a bit upstream. Aside from the fact that it’s still cool and overcast, this day is the exact opposite of yesterday, which confuses me. Should I get off this route? Of course, the answer is still yes. Because there will be more rain, more high water I have to cross, more demoralizing rivers too strong for me to want to do alone. 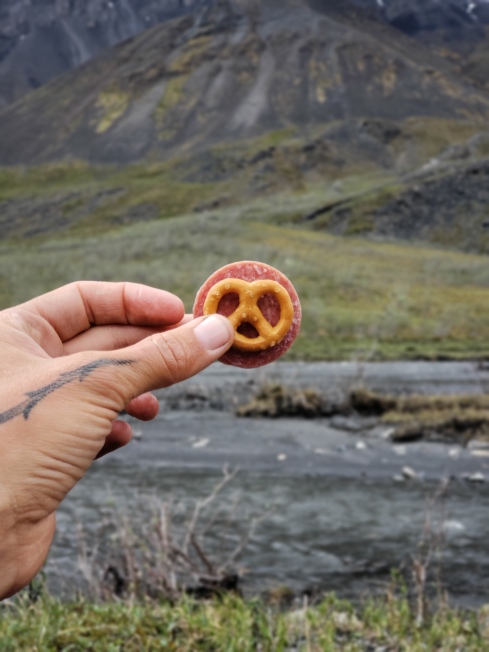 I go over a low pass that is empty of all sound and shapes except for the flat tundra and the mountains like upended buckets of scree with their jawbone white tops, around a clear still lake that rests in a gravel basin and is fed by nothing and drains into nothing, and over a tundra hill lined with caribou trails to a massive alluvial fan, a mile across at least, that pours from a heft in the mountains and has gathered just enough topsoil to support a thin layer of moss. And which can be used as a landing strip. The East Chandalar International Airport.

This place is barren, windswept, silent except for the engine roar of distance rivers, and sports tiny, purple flowers. I find one of the puddles of meltwater which are never more than ten feet away from oneself at any given time out here and fill my gatorade bottles with the tea colored water. I cook dinner in awe, sitting on the tundra looking around me at the stark mountains while the clouds play games with the sun. What a place, what a place. I ache thinking about how Gilbeau pass, which was to be my first tricky pass on the continental divide, is only a dozen miles away. I have got to come back here. One day.

Eventually it’s cold and I retreat to my tent and my sleeping bag and listen to an audiobook while the wind rattles the cuben fiber and a little rain falls. Tomorrow Kirk picks me up and I fly to Fort Yukon and then Fairbanks, where I’ll merge back into the rushing river of humanity. I wake at one a.m. when the land is blanketed in fog, and the world has grown inexplicably still. The lack of wind is what woke me. I make a cup of peppermint tea in the vestibule and eat a snack. I had been dreaming I was hanging out with friends in an old cabin somewhere, navigating the complexities of everyone’s interpersonal relationships over the years, the loyalties and disappointments and high hopes and perceived hurts and misread intentions. In my dream I had felt as though I was on a ship, riding the waves up and down over this thing we call life. I turn on the audiobook on my phone and lay back down in my sleeping bag, staring out at the cold, fog-blanketed tundra with its eerie 2pm light, and eventually I fall asleep again.