In the morning I work on my blog in my sleeping bag while the rain continues to fall, hoping that it stops; it doesn’t seem to want to, though. I make tea in my vestibule and the stove tips over; luckily the stove tips AWAY from my shelter, spilling fuel and spreading a moderate amount of fire in that direction. The stove continues to burn on its side, as popcan stoves are wont to do; I put it out by upending my pot on top of it. If the stove had tipped over in my direction maybe my whole shelter would’ve caught fire? I guess it’s all worth it to be able to make tea in my vestibule?

Finally I give up and hike in the rain, packing up everything inside my shelter, tossing my loaded pack outside, folding my wet tent into its stuff sack and strapping that on top. The mosquitoes rise up from the sopping earth like fog as I squelch my way through the flooded forest, and I don my headnet for the first time. Now fifty of them cannot try and bite me in the face at once. I’m on slopes way above the river and still, everything is so flooded. Sodden mossy forest alternates with fields of tussocks that are en route to becoming lakes. I slog through all of it with great effort. Turns out that when the ground can’t drain (on account of permafrost), a bunch of extra rain makes quite the mess. 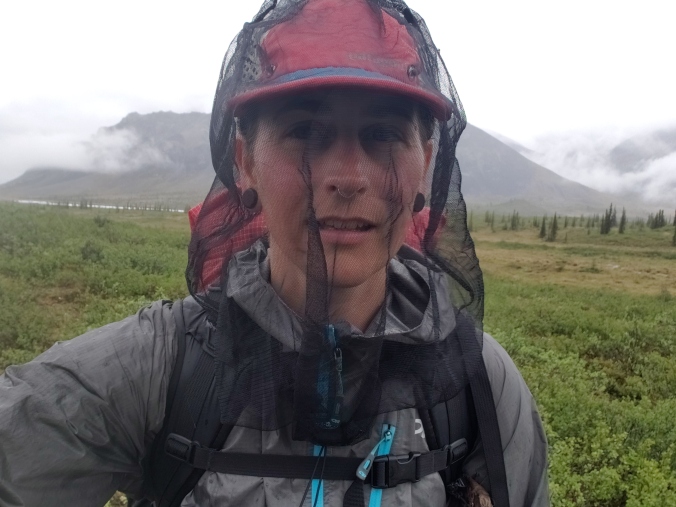 I’m walking on the slopes above a tributary of the Sheenjek, and this tributary is so swollen with water that it does not, as far as I can tell, have any bank at all- the water comes right up to the tussocks, and I can see the tops of the willows that would’ve made for easier walking roiling in the brown morass. Probably in normal years I could’ve walked down there- instead I’m banished to what is quickly becoming the worst tussocks of the entire hike. Type 3.5 tussocks. Each hairy basketball stands a foot out of icy water. The basketball is on a spring, and cannot hold your weight. Your foot falls off and plunges into the cold water between two tussocks, where it is wedged sideways. You lurch forward, catching yourself with your poles, which then get stuck in the bog, and you have to wrench them out. Over and over. For hours.

I go higher- tussocks. I go lower- tussocks. By 1:30 pm I am exhausted and demoralized and I take a break on a small stretch of gravel that has somehow not yet been subsumed by the flood. The rain has stopped but a heavy, cold greyness remains that mirrors my mood exactly. I put on all my layers against the cold wind and heat water for tea. I turn on my inreach- I have texts from Kirk, our bush pilot. He dropped three Swiss dudes off at Joe creek about a week before us- they’re also walking to the haul road. Now he says that they’re having trouble getting through the high passes due the meltwater- some of the same passes I was planning on taking across the continental divide. Some of these passes are like slot canyons, he says, and if the water is too high you can’t get through and it’s very dangerous. And this year the water is very high. Kirk recommends I head south instead, and take a lower route. This route is longer and will put me in tussock hell for days and days on end, but it’s doable. We talk about the route for a while, and I add the waypoints to my gaia app. He’d planned on placing my second cache tomorrow, he says, and if I take this lower route he’ll need to drop it at a different spot. So he’ll need to know by tonight what I want to do.

I think about this as I hike in the cold grey, stumbling over tussocks and through meadows that are now swamps of clear, icy water. Streams cut through these meadows now, and I find myself leaping from submerged grassy rootball to submerged grassy rootball over channels of waist-deep water that have opened up in the earth seemingly apropos of nothing. Occasionally I stumble and step crotch-deep into the water, and the shock of the cold reminds me that, if I was to fall into one of the rivers here, very little time would pass before my body became so numb that I could not move. And then I would drown, as one does.

I remember Kirk’s speech on bears as we flew to Joe creek:

“Bear deaths in the brooks are extremely rare. Whenever you hear of someone dying out here, it’s always by drowning.”

Now and then I cut back down to the tributary I’m following upstream through this cold grey valley, to see if there is any bank to walk on; there is not, and it appears as though the river is still rising. It’s frightening to see, actually, the way it creeps inland and consumes the willows, and after a time I just stay above it. I’m making slow but steady progress up the valley, still feeling demoralized and conflicted about the route, when I hear a churning ahead like the engine of a plane only, I know that the sound is water. It’s a tributary of the tributary I’m following, coming out of a drainage to the right, and almost before I see it I know I won’t be able to cross. And then I reach it- deep fast milky brown water, the rumble of boulders being pushed downstream. I follow it to where it meets the river but it churns wildly there as well. I know my next best guess is to follow it upstream towards its source, in hopes of finding a place to cross… but suddenly I just can’t anymore. The reality of all the wild dangerous stream crossings ahead of me in this year of high water, and having to face them alone, finally sinks in. Even if I take a lower route and avoid being cliffed out by water in the high passes where the route narrows into a gorge, I’ll have to cross streams like this every day. In a normal year you’d still have sketchy stream crossings but this year they’re worse, and I’m by myself. I just can’t fucking do it. At least not emotionally. I can’t face the very real prospect of my own death every single day, just for the sake of doing this route this year. It’s too much. 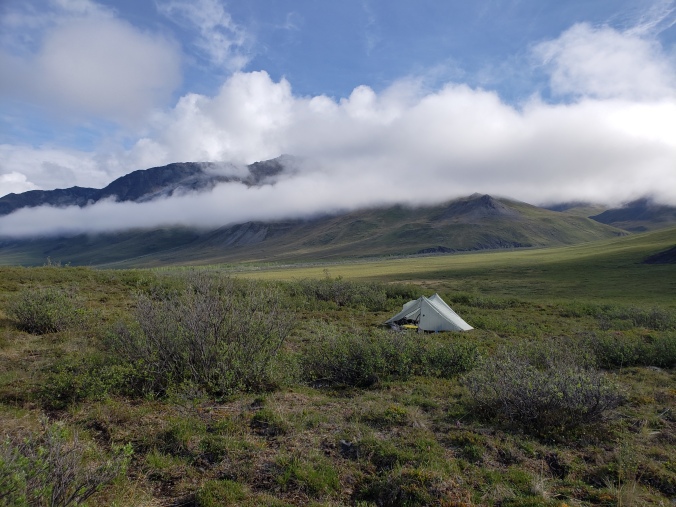 I text Kirk on the inreach, and ask him if I can schedule a pickup. He sends me coordinates for a spot eleven miles further along my route, says he can be there the day after tomorrow. I don’t feel shame, or disappointment, or loss. I just feel relief not to have to face that water alone.

I text with Bunny, who is in Fairbanks staying with Allison and AK. “I’m getting off this route,” I say.

“For real?” She says. We both still really want to do the 20 day Noatak river part of this trip- this is the year to see the arctic via boat, not on foot- and we talk about when to do that- August still? Or should we move it to July? Bunny is still injured, but as long as there’s time to rest her foot before we resume our journey she should be ok.

It starts to rain again and I check the forecast one last time before drifting off. More rain coming in the next days. More rain, more snowmelt, more runoff…