In the morning we hike out of the towering lodgepole forest to a bowl, the source of White Fork, and above us is a narrow ridgeline made entirely from scree. Skurka’s notes say to “look for the bronze band,” as that will lead one to White Fork Pass. We locate this band, a vertical stain on the scree just below the ridge, and begin to climb the escalator of loose, dusty rock- one step up, one half step back. 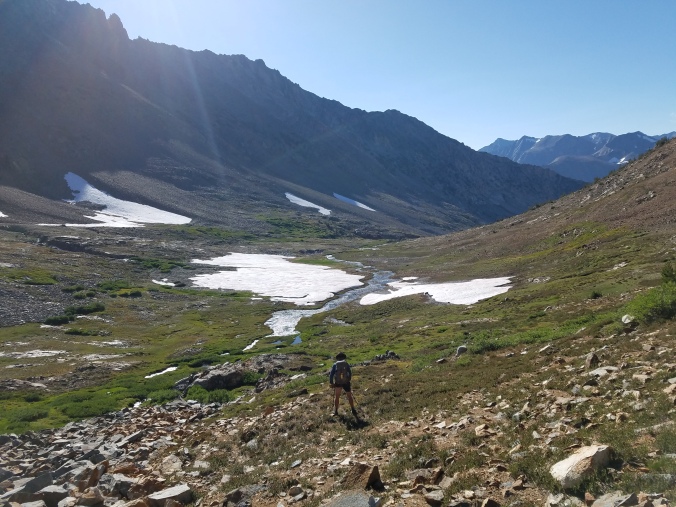 It kinda looks like the brooks range up here 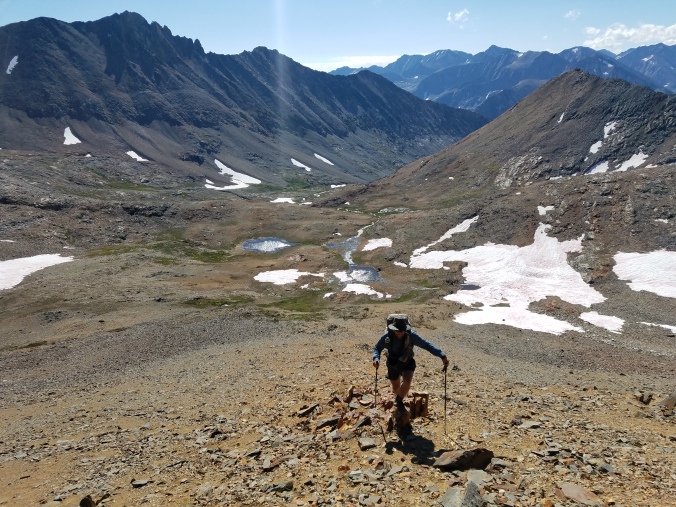 The sun is bright and cold and the scree is steep and infinite and I’m feeling the exhaustion of this route in my legs, today, so I play Miley Cyrus’ The Climb from my phone and sing out loud, which never fails to cheer me up. I’m also dizzy from hunger, as I’m attempting to ration the last of my food. Basically, I am nearly out of snacks, and most of what I have left is meals that need to be cooked, but I’m also running low on stove fuel. I know exactly how many boils I have left in my little plastic fuel bottle, and if I play my cards just right I know I’ll make it, although I will probably be fairly hungry in between meals. Which is what is happening right now. 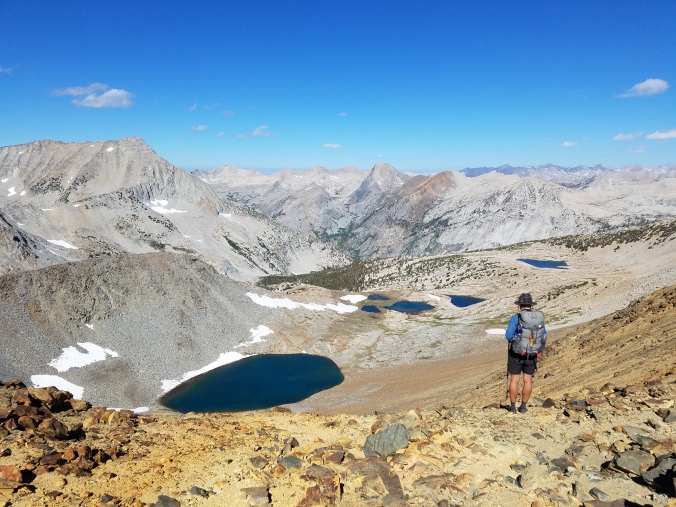 At last we attain the ridge and go plunging, running, wooping and hollering down the scree on the other side, towards a fantastic dreamscape of lakes and bright granite and green clusters of forest. When we reach some grass we stop to eat lunch and I cook up a mush of sweet potato powder, instant refried beans and olive oil, which fills the cavern that is my stomach, at least for now. 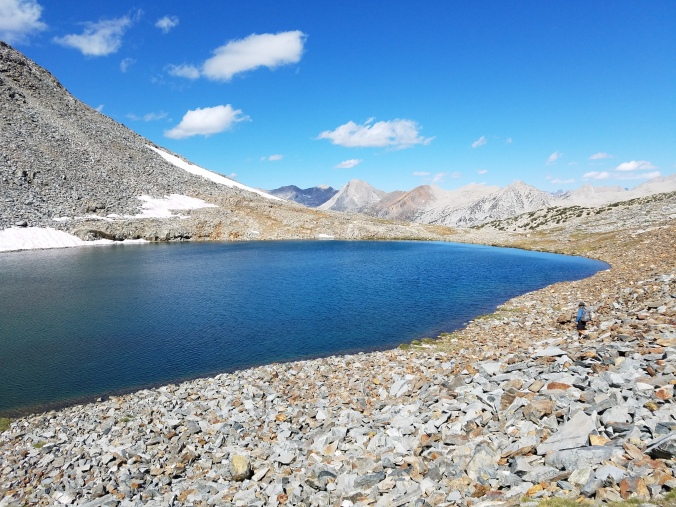 another of the goddess’ perfect tarns

Massive talus interrupted with bits of steep lodgepole forest, doing the work it takes to move across this earth, feeling grateful for my two magic legs. We’re contouring around some massive shit above a river with some more massive shit in the far distance. Myriad drainages create folds in the fabric of reality- our planet is mysterious and labyrinthine. It’s so fun, every day on this route, to look ahead and at the maps as one walks and make guesses on which drainage one is heading to. Sometimes I’m right, sometimes I’m wrong, often I reevaluate as I round a corner and a new hunk of topography is revealed. I zig and I zag slow like an ant, but I always get there, eventually. 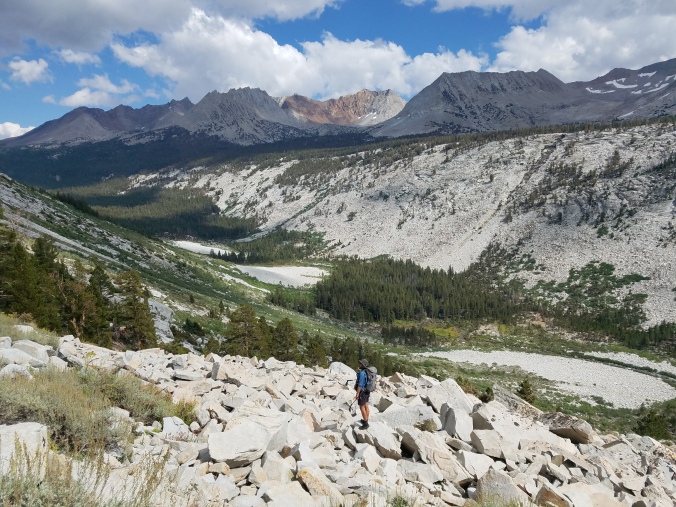 what u know abt talus

By and by we descend all the way down to the South Fork of the Kings River, which we’ve been hearing for a while. I was worried that the river would be too strong to cross but I find a spot where the river is braided and cross easily. On the other side of the river there’s supposed to be an abandoned trail, the Cartridge Pass Trail, with Real Switchbacks, but we don’t find it, and the fastest way from point A to point B, anyway, is straight up, so up the slabs we go, like climbing a staircase. Stormclouds gather as we ascend, and on several of the slabby landings are nooks where animals make their homes. Coyotes? Mountain lions? Squirrels?

We take a break at the lake just below Cartridge pass and sit in the lee of a boulder sheltered from the cold wind as the sky rumbles and it starts to sprinkle. Kodak has a big bag of peanuts from Winco left and he gives me some of them. Usually peanuts are the last thing in the world I want to eat (when you’re a hiker and you burn out on trailmix, you burn out HARD) but right now I am fucking hungry and the peanuts are literal gold, like you couldn’t buy these peanuts anywhere for a million dollars, especially sitting next to this lake in these lean mountains far from everything.

We do find a faint trail at the top of Cartridge pass and said trail leads us in fits and starts down the talus and patches of bare scrambly ground where everything that could’ve slid off has already slid off, towards Lakes Basin. 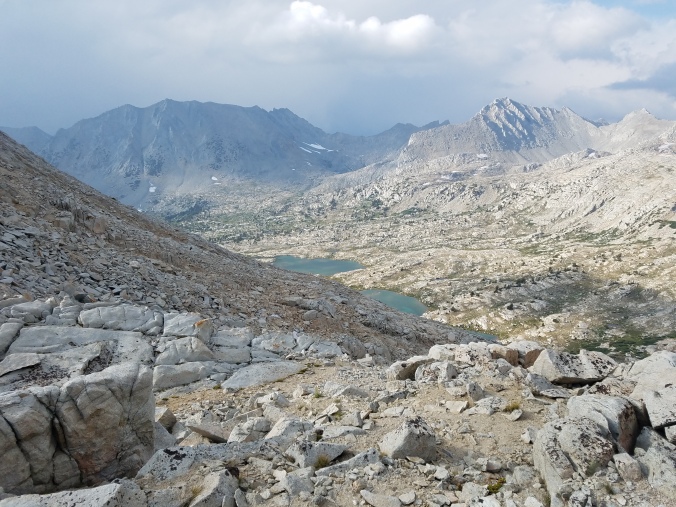 We reach Lakes Basin as the sky blackens and the wind picks up and suddenly a real brusier of a storm is rolling in. It’s only 5:30pm but our next task is going up and over Dumbell Pass, which is another exposed climb on slabs, so when we find a flat spot sheltered by a few gnarled pines we throw up the tarp in storm mode and call it a night.