Planning where I should mail my resupply packages to along the 2600 miles of the PCT should be really confusing and overwhelming. It should take days of exhaustive research and it should require a good amount of crossed fingers and educated guessing. But it’s not, and it doesn’t. That’s because Yogi’s guides exist. Yogi is Jacki McDonnell, a thru-hiking enthusiast who is also, apparently, a data-organizing genius. I haven’t seen travel data this helpful and specific since the hand-copied freight train data zine whose name must never be mentioned on the internet. I can’t really explain to you how specific and helpful Yogi’s guides are. They’re just incredible. Basically Yogi not only tells you the answer she would give to every single question you might have about the PCT, but she throws in the answers of a dozen other thru-hikers. To every question. And then when it comes to resupply stops, there is a spreadsheet with every single possible resupply point and a dozen thru-hikers tell you where they would’ve resupplied and whether they would’ve bought food or mailed themselves a package, if they could do the hike again. All you have to do is pick the hiker who is most like you (I found a woman who doesn’t eat gluten and who probably hikes at a similar pace to me) and go down the columns, checking off all places where your hiker mails themselves a package. 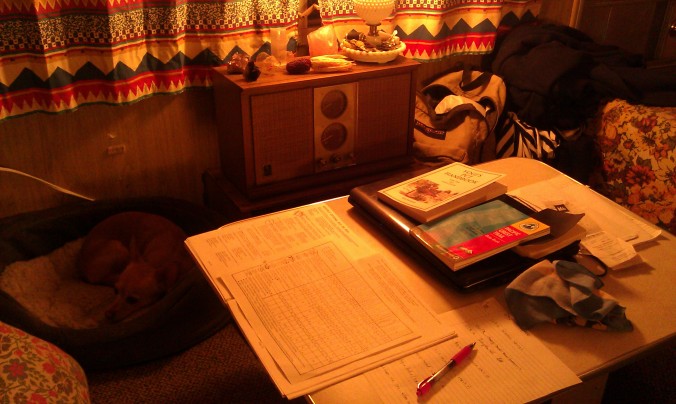 So that’s what I’m doing tonight. Today was BEAUTIFUL, sunny and with cherry blossoms, and it made me so crazy excited for summertime, for sleeping outside, for arduous overland travel, for this trip.

Readers! My kickstarter only has 2.5 days left! It’s 62% funded with 105 backers. I only have $1300 more to raise! $1300, that’s like NOTHING! If everyone who reads this finds two people to buy my book for $8, which is going to be the MOST AWESOME AND INTERESTING AND LEAST BORING BOOK EVER, then the project will be funded. And you have 2.5 days to do it. Let’s get this thing funded! I can’t do it without you.