The camp kitchen is one area where the philosophy of lightweight backpacking really shines. It’s actually super easy and not genuinely not expensive to have a backpacking kitchen that weighs only a couple of ounces in its entirety. And ultralight backpacking stoves, the shining stars of the lightweight backpacking galaxy, are everything that you want your gear to be- practically weightless, beautifully simple, straightforward to use, free, and you can make one yourself. Out of trash. 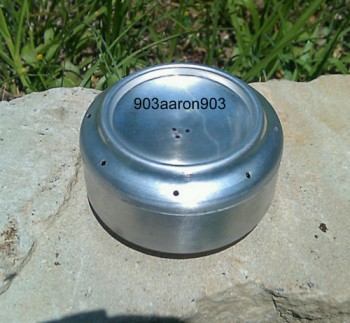 The penny stove is made out of a couple of soda or beer cans. You can find instructions here, or there are also many youtube videos. You fill the stove with denatured alcohol through the little holes in the top, put a penny over the holes to create pressure and light the thing, creating a magic little burner out of nothing. The stove weighs 0.3 oz. And it’s made out of trash.

I was going to try and make one of these stoves the other day, but then I saw that this guy was selling them on ebay for, wait for it… three dollars. So even if you’re feeling kind of lazy, you can still have one of these stoves for next to nothing, and also support some guy somewhere who makes them in his spare time. Because the internet is magical like that.

I also ordered this pot stand from the same guy. The stand is made from a piece of chicken wire. I can just imagine this guy, sitting on a bench in his yard in the sun, snipping up pieces of chicken wire and folding them into pot stands. The pot stand and the stove together cost me…. four dollars. For all I know, “903aaron903” is making my stove and pot stand RIGHT NOW. THANK YOU, 903aaron903!

Alcohol stoves use denatured alcohol. I am a little bit afraid of denatured alcohol, and if you’ve read this story you know why. But really, it’s harmless, like carrying a bottle of vodka in your pack. A plastic bottle that once held bottled water, fitted with the squirt cap from a siracha bottle, makes a really good fuel bottle. It’s good to try and figure out how much fuel you’ll use each time you boil water, and to bring only as much fuel as you need between resupplies. Fuel is heavy. 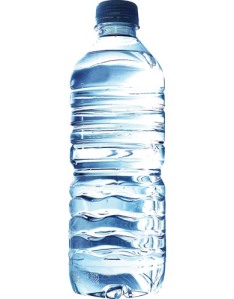 With an alcohol stove your culinary magic is pretty much limited to bringing water to a boil. All of the hot meals I’m bringing on the PCT are prepared via dumping them in boiling water, putting the lid back on the pot, and then waiting like 10 minutes. Even if I had a stove that was able to simmer, this is as much preparation as I’d be willing to commit to at the end of the day. 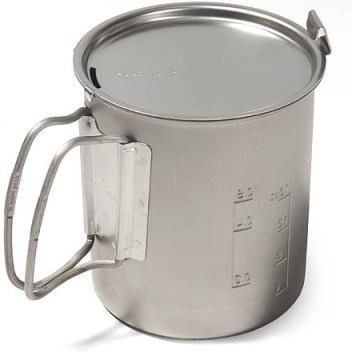 A 700ml titanium pot is very light (4 oz) and perfect for one person but it is also expensive ($45). I totally sprang for one of these last summer, but only because I am afraid of cooking in aluminum. You can get a one-person aluminum pot that’s just as light for way less from, like, walmart.

I made a windscreen out of a piece of aluminum foil folded in half. My lighter is a mini-bic (yay mini-bic!). I have a titanium spork.

That’s my tiny kitchen. Tiny kitchens are awesome! And you know what else is awesome? THE BOOK I’M GONNA WRITE!

My kickstarter is 35% funded with only 9 days left to go. You might be asking yourself, how the heck is this thing gonna be funded? And my answer to you is, I have no idea. You know what though? Kickstarter is really fun. I hadn’t spent much time on there before I created my campaign, but now I like to poke around and look for projects that I like, and it’s become another way to waste time and procrastinate doing what I’m supposed to be doing! It’s cool though, I get to give money to really weird projects, like placemates shaped like the golden ratio or speculative publishing projects that I don’t even really understand. And then I get to check back in and be like, how is this project doing? Is it going to “win” or not? Like the project is a character in a game, competing with all the other characters. It’s actually sort of addicting.

So think of my book project as a horse, and you’re at the horse racing track. Don’t you want to put your money on my horse? Gambling is kind of fun, RIGHT? And my horse is, like, REALLY fast. My horse is also REALLY shiny and REALLY excited to beat all the other horses. It’s, like, frothing at the mouth with excitement. My horse is going to WIN.

Here’s the link, for you to share! And THANK YOU!

6 thoughts on “Preparing for the PCT: My wee backpacking kitchen”