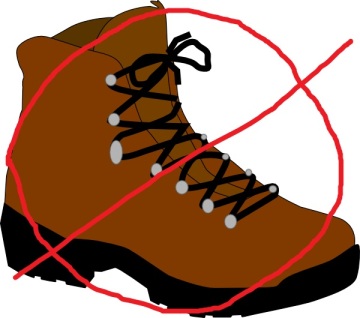 The first backpacking trip I ever went on, the Resurrection Pass trail in Alaska, was a forty-mile walk through a flower-filled alpine meadow that crossed the Kenai Peninsula on the ridges of the Kenai Mountains. It was a pretty simple hike, as far as backpacking trips go- tree-line in Alaska is low (it gets lower as you go north) so you don’t have to hike up very high before the forest disappears and you’re walking through lush, grassy meadows, crossing brooks on little footbridges, and stopping to nap in puddles of sunlight.

So the trail itself wasn’t very difficult, but the journey was still super painful because I was wearing these big, heavy, leather hiking boots. By the end of the trip patches of the skin on my feet had been rubbed clean off, and I was limping along on painful, swollen stumps. A few summers later I went backpacking again, this time with really breathable hiking boots that were much more lightweight. It was only a three-day trip, but by the last day I was gingerly picking my way along the gravel trail, barefoot. The pain of walking on sharp rocks in my bare feet was actually less than the pain of wearing my boots.

I kind of gave up on backpacking for a while after that, until I discovered ultralight backpacking, in particular this book about the subject. (The author also has a series of really accessible youtube videos on lightweight backpacking, as well as a video in which he spins his cat around on the floor.) I had never thought to question the weight of my pack before, or what conventional wisdom told me about what footwear I needed to wear. But ultralight backpackers are all, “F conventional gear!” and they make everything themselves, out of trash or fabrics that they order off the internet. And they hike in running shoes.

Much conventional backpacking wisdom is based on fear. Packs are built sturdier and much heavier than they need to be, because of fear. Tents are made to be indestructible, even when set up carelessly, because of fear. Backpackers are encouraged to bring redundant insulation and too many sets of clothes and epic first-aid kits, because of fear. And of course when one is walking along a maintained dirt path, one must wear heavy leather hiking boots that were designed for crossing fields of big, jagged rocks and other challenges of hardcore mountaineering, because of fear.

The assumption behind all of this is that the backpacker is kind of stupid. The backpacker throws his pack off of rocky precipices and then sits on it; the backpacker has stumps instead of hands, and cannot be bothered to carefully set up his tent. The backpacker rolls his ankle with every step, and must wear extremely restrictive footwear in order to keep him from falling flat on his face.

Ultralight backpackers often make their own equipment because the truly lightweight gear is much more fragile, and few retailers want the responsibility of carrying gear that will only last through one or two thru-hikes. I was reading an interview recently where an ultralight thru-hiker was asked how he is able to go so far on such delicate gear. I am careful, he said.

(A cottage industry has sprung up around this need for delicate, lightweight gear- check out the retailers here and here and here.)

Last summer I went on my first lightweight backpacking trip. It was forty-two miles across the Olympic Peninsula, I wore running shoes, and I didn’t get a single blister. The whole experience was incredible- my pack didn’t hurt me, my shoes didn’t hurt me, walking uphill wasn’t grueling and impossible; it was freaking awesome. That hike last summer was what set my heart on doing the Pacific Crest Trail.

Afterwards I read a bunch of PCT trail journals, trying to figure out which shoe I should wear for my hike. In 2012 the most popular thru-hiker shoe by far was the Brooks Cascadia trail-running shoe. People were nuts about this shoe, wearing through pair after pair and never getting blisters, even after thousands of miles. Last month I wrote to Brooks, along with a bunch of other companies, telling them about my plans for the PCT and the book I’m going to publish and asking them if they would sponsor me with gear. Brooks wrote back and then a week later I had a package on my doorstep- a pair of Brooks Cascadia 8 trail running shoes, in bright red. Thanks Brooks! I had ordered them two sizes larger than I would ever wear, because apparently in the desert my feet will swell up like balloons.

I put the shoes on and walked around my trailer, pretending I was on the PCT. It’s hot! I thought. I’m running low on water! I imagined myself booking it through the Mojave in the hour before dawn, feeling the heat of the sand through the soles of my feet, trying to get in the miles before the impossible middle part of the day. Zipping up my wind shirt against the wind, wiping the sleep from my eyes, blearily reminding myself to watch for rattlesnakes on the path.

Hey guess what! I really, really, really want to hike the PCT and write about it, but if my kickstarter isn’t funded by April 2nd, I won’t be able to go! Pre-ordering a copy of my book through my kickstarter is like literally giving me a book advance to hike the PCT- you, dear reader, are filling the role that traditional publishers once filled. With your money you are saying- I have faith in you! Here is my advance for the book you are going to write, which I know will be awesome! Go forth and write this book which will be pleasurable to read!

I’m super humbled by all the pledges this project has already received. Right now we’re $3 away from 30% funded, with 13 days left to go. If you haven’t already beat this link over the heads of everyone you know, will you share it now? Don’t make me send my new shoes back to Brooks with a note that’s all, JK, can’t hike the PCT after all 😦

And thank you awesome readers! I am so excited about this project!!!

This video is so cute. Mike Clelland’s ultralight backpacking tips- starring his cat!