Dear readers! For the next forty-eight hours my novella-length memoir, Ten Thousand Miles by Freight Train, will be free on Amazon. You can find it here. And you don’t need a kindle to read it; you can download an app to read it on any screen here. 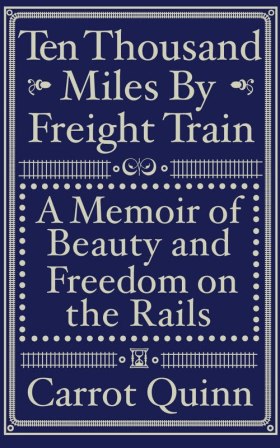 In other news, I’ve been wildly at work on my next book, which is about the time I traveled to Alaska in March, via craigslist ride, got in a crazy accident in the middle of the Yukon in which our car was totaled, and ended up hitchhiking the rest of the way, alone, in fifteen below zero weather. Followed by months and months of other adventures. Here’s a paragraph that I wrote today that I like very much-

“The taiga was infinite; the taiga was endless. The Alcan was an icy ribbon that bisected this inland sea of tilted, snow-draped spruce trees; there was nothing, anywhere, on either side of us but this great, flat forest, on and on as far as the eye could see. There were no other roads; there were no gas stations; there was no cellphone reception. There was only the forest; there had only ever been the forest. We looked at it and we knew that the reality that we had previously experienced, the reality of the city, had only been an illusion; it had been a moment of dishonesty, a blip in the movie reel of time. Nothing was more real than this great wilderness, now, where we were; nothing was more tangible than this place outside of time.”

I’m planning to release the book around the first of March, which is really exciting. Oh, the instant gratification of self-publishing!

The only problem is, I don’t yet have a title for this book. Maybe you can help me brainstorm? Here are some things which feature in the book-

-Many strange and magical people who live in various beautiful and ramshackle dwellings, deep in scraggly pockets of forgotten wilderness, and how they live

-A roadkill caribou riddled with botflies

-A remote military village with many lonesome, abandoned houses and families who hoard firearms

-A camper van, a lake, a cast iron skillet

7 thoughts on “My freight train memoir is free today on Amazon, if you don’t already have it, and also news about my next book!”