I’m moving. I’m leaving my one-bedroom apartment (which was never really mine, which was, in retrospect, just a beautiful, palatial hole in which to dump wheelbarrow-loads of money that I will never see again) and I’m moving into a sixteen-foot travel trailer that I bought off the internet.

I am poor again, and also recently nostalgic for the days when I had next to no possessions and lived in small, ramshackle domiciles and so it didn’t really matter, at all, that I was poor, and it didn’t feel stressful. So I looked on craigslist a few weeks ago and in 24 hours I had bought an ugly, sixteen-foot travel trailer from 1975 for the price of one month’s rent in my one bedroom apartment. Afterwards, after handing my envelope of money to the young mason on Sauvie’s island, I was stunned. One month’s rent! I had lived in my apartment for one year. I imagined twelve little travel trailers, all lined up. On the drive back to my apartment, title to my new trailer tucked safely in my backpack, I told myself that I would try to no longer spend very much money on things that were intangible, things like time and the ability to exist. Things that should be free.

So I am moving. I am leaving this block where I live (have lived! For a whole year!) and I am moving a little bit south and east. I am moving my new travel-trailer from Sauvie’s island to a driveway where I will pay a little bit of rent to run my extension cord through someone’s kitchen window and siphon water from their garden hose. My trailer has a little kitchen with a little three-burner propane stove and a pot-roast sized oven and a tiny fridge that needs defrosting. It has little windows with little curtains and I know that my tiny dog and I will be very, very happy there. But I am sad and suddenly, overwhelmingly nostalgic, because I am leaving this street where I have walked my dog, in the last year, approximately six hundred times. I am leaving this place that I have gotten to know better and more thoroughly than any single place, in all my ten years in Portland.

I have walked my dog here. A lot. I know this neighborhood, this half-mile radius. I have walked by the hoarder’s house, with its growing bamboo barricades and broke-down camper vans stuffed with trash. I have peered in the windows of all the vacant houses, imagining what it would be like to live there. I know the corners where ragged german shepherds, activated by the jingling of my dog’s collar, explode behind too-short chain link fences.  I know the crowded thoroughfare on the other side of the houses, with its KFC, popeye’s chicken, seasonal Christmas tree lot, and impossible crosswalks. I know the broken sidewalk, the (un)dead ends, the places where the concrete stops and there are raspberry bushes, broken benches, loose chickens. I know where the freeboxes are, saturated from the rain, contents spilling making still-lifes on the ground. I know the blackened creosote pole which someone, before I came to this block, knit a brightly-colored cozy for. I know the grassy medians of the busy street just north of here, where I once walked my dog in the bitter cold to Walgreens, angry for some reason I cannot remember. I know the cold blue glow of the streetlights at the corner that stay on all night, I know the way the mist at midnight hangs over the vacant lot where I take my dog to pee. I see my neighbor’s habits, the way they come and go, the way they are never home or are always home, the way they make constant noise or no noise at all, the way their window blinds are always closed save for a single broken slat.

And the places I walk- to the co-op, to the dog park with its chip trail that turns to mud in the rain, to the post office where the only place to tie up my dog is the aluminum bike rack that is the old kind, the kind that was designed by someone who had never seen a bicycle. North, to where there’s a mural in the street to try and make people drive slower, and still north, to where the neighborhood turns to angles. The coffee shop that closes early, the daycare that used to be a pot café. The pink clouds in the west, the dripping wet everything, standing alone in the dusk, breathing the quiet air of the neighborhood.

The brownie ghost. The waffle-cone ghost. The smells that come from the sugar factory out by kelly point park, drifted all the way over here on the air. The wet air, the cold air, the warm air, summertime when I would walk, slow, in the heat, in my Birkenstocks and cutoff jean shorts, my dog roasting like a little wheat field. Those six weeks of real summer heat.

And my apartment- empty white shell that it is, beneath all this stuff I’ve accumulated since moving in. So novel to have a whole apartment all to myself, I was so excited and apprehensive about the effort it would take to decorate and furnish the place. When I moved in I had a couple pieces of furniture and I think three houseplants, one of which, the succulent that was like cartoon fingers, died immediately. The others, a string-of-pearls that reminds me of my grandmother and a jade plant that is a cutting of Corinne’s jade plant that is a cutting of Corinne’s grandmother’s jade plant- the grandmother who died, and who Corinne loves very much- have lived, albeit reluctantly- the string-of-pearls being impossible to please and the jade plant being very slowly suffocated by a faint white fungus. Since moving in, I’ve adopted a dozen other plants- a succulent with fat, furry leaves, a green plant with brown spots, a hanging leafy reddish creeping creature with a hunger for world domination. A vigorous variegated plant that makes boring little flowers, a plant that grew a huge amount and then stopped growing at all, an extremely optimistic cactus that is always blooming. A three foot tall ficus tree, four or so air plants that live in brass candlestick holders, a madenhair fern that I am constantly disappointing. And the lily that Seamus gave me for Christmas, in its pretty little pot, making pretty little upside-down lily flowers. All in my living room.

When I first moved into this apartment, I did not have a couch. I found one for free on the internet, had it delivered to my apartment sight unseen, and discovered that it was, in fact, the couch that I was looking for. Square and short, shiny seventies velour, covered all over in dusty blue flowers. It was, as it turned out, also saturated in a half-century’s worth of cigarette smoke, and one could not even sit on it without being overcome by waves of nausea. But the internet told me to dump boxes of baking soda all over it, and I did, and the smell, after a period of time (and lots of boxes of baking soda), went away.

I decorated the rest of my apartment to match my couch. I sewed curtains from a few yards of fabric I found at the thrift store near my house- beige with crazy red flowers exploding like fireworks all over it. And then, the best thing at all- three giant, dilapidated fake landscape paintings in ornate wooden frames, found with Seamus at the goodwill bins. Two of the ocean, and one of the forest. The larger of the ocean paintings I put in my bedroom. It looks like the Oregon coast, and I stare at it when I am sad. Also, the luxury of having a bedroom that is just a bedroom, as opposed to living with friends and having your bedroom be a study area and a hangout room as well, because it is all the personal space that you have. A bedroom that is just a bedroom and nothing more. A magic sacred sleeping space. Sparsely decorated and with a huge, extremely comfortable bed, good diffused light collected on the walls and the sound of the neighbor’s goats. And the ocean there with you too.

I am worried that there will not be room for all my houseplants, when I move into my tiny new house. And my landscape paintings will have to go into storage, or on Seamus’ wall, because he likes them. There is no surface, in my tiny new house, that is large enough for the ocean. But that doesn’t matter because I am a fool for wanting to keep something like an ocean in the first place. The ocean is a free being, it cannot be kept. It resists captivity, and I am a fool with foolish desires, and if I was not forced, constantly, to shovel them overboard like wild, flying eels swamping an inflatable boat, I would be crushed beneath the weight of them.

If I called up the ocean and said that I was sad because I wouldn’t have any place to put my ocean painting, the ocean would say shut the fuck up, and then it would bash me against some rocks until I stopped resisting and became one with the great big everything.

So I am moving. I am leaving this warm, safe little nest that I love, and if anything proves that I am alive, that my heart is beating in this world where everything, constantly, is changing, it is that. 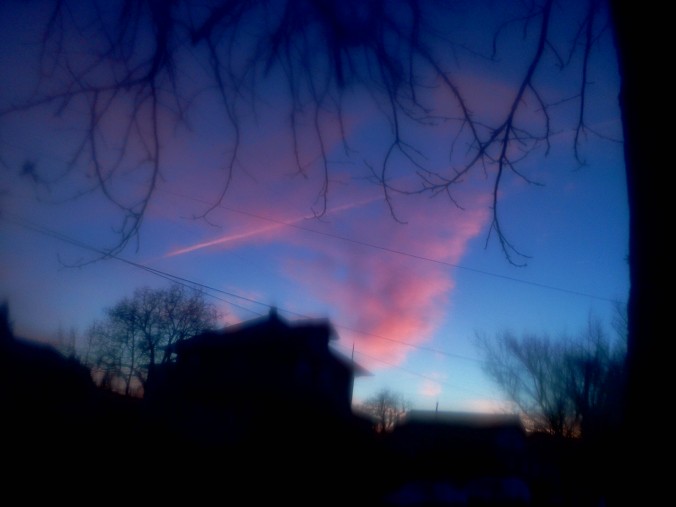