Hello dear readers- sorry it’s been forever since I posted. I’ve been working a heck of alot, building a thick nest of dollars to insulate me from the rough world, lake swimming, making huevos rancheros on my new two-burner campstove, tossing zucchini ends to the squirrels. The sky is clouded with smoke from forest-fires, the sun is a shiny nickel. Life is good, life is seamless, it’s summertime, I still don’t know what I’m doing with my life. Time goes on. I’ve also fallen out of love with the anonymous internet, but instead of telling you, I’ve just disappeared. I might not post on here anymore. I don’t know. I might just post photos. I have to take them.

But speaking of photos! Mike Brodie is the Polaroid Kidd, and his photos have been around for a couple years. He used to live in a house in SE Portland next to the railroad tracks with some friends of mine- he left town to ride freight trains when he was 18, criss-crossed the country, took a lot of incredible pictures, pasted them on his website. He did a show somewhere in 2007 and then fell off the face of the internet earth. What he documents, incredibly, is the subculture I came of age in, a subculture that only exists in tangible, three-dimensional, sun-and-rain, do-it-yourself reality, and has never, and will never, have much of a presence on the internet. And looking at these photographs, I think, you can see it. You can see how special and rare they are- how the people and places in these photos exist entirely outside of commercialized western culture, how they will never, ever be commodified, and you must know, too, that the the subculture captured here is self-conscious enough to discourage this sort of documentation, nearly almost all the time- to the point that an attempt to flatten it for a photo, or for, god forbid, the internet, will generally either fail entirely, or the subculture itself will simply disappear, like smoke. And so what Mike Brody has done is, too me, so incredible that I don’t even have words for it. But what it is, again and again and again, is inspiring. So, so inspiring. I have been to a couple of the places in the photos, including that shack in Asheville that is sided in cardboard and the train overpass where the kid carries a purple net bag of dumpstered produce. Mike Brody’s website, of course, has been defunct for a year now, but thankfully a chunk of his photos still circulate, and you can see them pasted on various blogs across the web. I have gathered some of the links here- one, two, three, four, five. 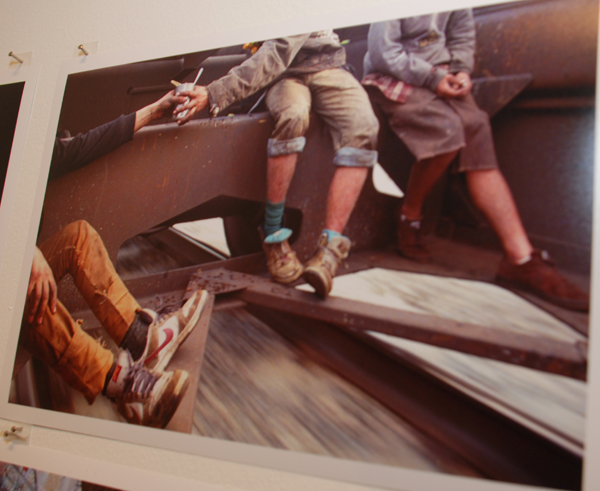 6 thoughts on “The Polaroid Kidd- these photos melt my heart”