I sleep amazing in the patter of rain and wake with the most intense pain in the arch of my left foot. Oh, the damage you can do when your feet are numb bricks the first two days of a hike and you wrench them for hours through tussock fields. Maybe this pain won’t stick around, though? We shall see.

Bunny woke up in quite a bit of pain as well- her entire left foot is bothering her, from a bruise on the bottom side of the foot to pain in the ankle and achilles tendon. This doesn’t bode well, but I try not to stress about it. Maybe both our pain will be gone by tomorrow.

I feel strong today. It’s raining consistently, real rain, and we’re cruisin high above the Kongakut, which no longer has much in the way of gravel bars, on the gentle slopes of the good green mountains, through type 1 tussocks on a caribou trail so smooth and good we christen it the BCT- the Brooks Crest Trail. And now and again a patch of type 3 tussocks, just to remind us that we’re alive. It’s not too cold and I don’t mind the rain, I listen to the same two Taylor Swift songs over and over as I have all sorts of imaginings in my head and watch the low hanging clouds and fog move amongst the mountains. We’re firmly stuck on the north side, or river left, of the Kongakut, as it’s now one single deep channel that would be difficult to cross, but we’ll be following it for a while longer almost to its exact headwaters before veering off up another drainage over our pass- our first pass on the continental divide! So not being able to cross it again shouldn’t be a problem. 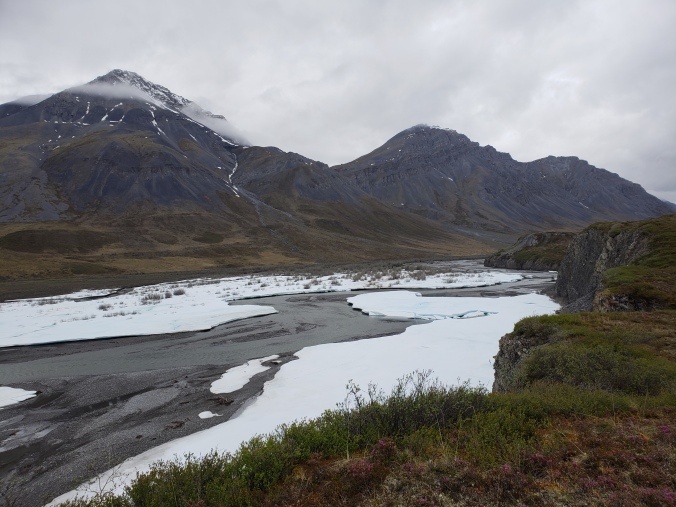 In the afternoon we reach an unnamed tributary of the Kongakut, which we’ll need to cross in order to continue on our way. It’s just a tributary, it shouldn’t be a problem, right? Unfortunately we come out of the willows at our crossing spot to find a raging river- swollen from the snowmelt up high that was brought on by the rain, brown and churning over its banks. Therein begins a debate between Bunny and I- she thinks we can manage a two person crossing downstream, where this river meets the Kong. I think we should hike upstream, as we’re only a handful of miles from the headwaters of THIS river, and as we cross its tributaries it should grow smaller. Finally we agree to hike upstream a few miles, and see what it looks like, and if it doesn’t bode well we’ll hike all the way back down to where the two rivers meet.

It doesn’t look good. We’re standing way up on the green ridge, having climbed far above the river valley in order to follow this raging tributary as it wends its way through what is becoming more and more gorge-like with each bend. How is this river so big?! We look at the map and count the tributaries that feed it- twenty two. Twenty two tributaries! Many of them from glaciers. And then a short life before it dumps itself into the Kong.

We’re cliffed out, at this point, unless we climb way, way up towards a peak and cross a large, steep scree slope. Defeated, we turn around and hike back the way we came, struggling now and then through the tussocks.

The river really doesn’t look fordable to me at the spot Bunny picks, but she knows way more about river crossings than I do, having been a whitewater kayak guide. Anyway, I’m terrified.

“Point your toes upstream and sidestep,” she says. “Fix your eyes on something in the distance. If you look at that water you’ll loose your equilibrium. Use your poles to check for depth. Walk the lines where two channels split- this is called the zipper. It’s shallower here.” I imagine a steel beam going down through the center of my body and into the earth. The smaller channels aren’t as bad as I thought they would be- opaque, silty water seems to appear deeper than it sometimes is. Soon we’re at the largest, most roiling main channel, and we decide to do a two person crossing. I stand directly behind Bunny, my hands holding the sides of her pack, my poles hanging from my wrists by their loops. We both face upstream, and step in unison, as though we’re ballroom dancing. This way my legs are always in the eddies behind her legs, and the river feels much less strong. I also lean on her pack somewhat, and she is leaning on her poles, so this makes it feel more stable for her as well.

“Step!” She shouts above the roar of the river, and we both take a step to the left, deeper into the current. I can feel the ground shifting below my feet, and a fist-sized rock tumbles by, striking me in the shin. A steel beam, going down through the center of my body, into the earth… “Step!” We step again. I stay in her eddies, I do not fall. The river roils around us. “Step!” Soon we’re on the other side, and I am shaking with adrenaline. We made it!

It’s nearly 9 pm- our first 15 mile day but only about 11 miles of that count towards our route because we spent so long hiking up and down this river, looking for a place to cross. These miles are not easy miles, that’s for sure. We find a flat place among the low-monched willows and pitch our shelters, exhausted. The sun comes out until about 10pm and we cook our dinners on the tundra and then the rain returns, driving us inside. We’re 21 miles from our cache at the Sheenjek river, and I sort through my remaining food in my tent. Kirk said that the Sheenjek would likely be our toughest crossing between here and the haul road, and that we might have to walk up it for an extra day in order to find a spot to cross. Our cache is on the other side of the Sheenjek and if it takes us an extra day to find a spot to cross I’ll be hungry for sure.

I haven't "traditionally" published much of anything before and now this long wait until The Sunset Route releases in July has me d y i n g with anticipation and happy, frantic dread- there should be a word for the fear and anxiety you feel when something might go right- I feel like a sheet of glass that could shatter and I often think abt how dogs can't tell the difference btwn human excitement and human anxiety and maybe there is no difference, esp when yr nearing middle age and yr adrenals are shot. Anyway I'm actually totally fine, just probs had too much caffeine today, my life this winter is very quiet and very good, all the yellow and orange flowers are blooming in my neighborhood and I can't focus on anything and I'm in love with the world and also sad often but in a beautiful way, perhaps that's the best it ever gets. I hope you're finding pleasure or at least the anticipation of pleasure, in your dreams, I can't wait for the collective catharsis that will come after this panny is over
Some humans have wanted for centuries to prove that time has a directional arrow- that the future is unknown, becomes the present, ends, and moves behind us. We've used entropy- the fact that things become more disordered- as an argument in support of this. In 2009, some scientists argued in a paper that the arrow of time can be explained in terms of quantum mechanical entanglement. As a physical system becomes entangled with its surroundings, the paper said, it moves closer to equilibrium. This one-way evolution determines time’s arrow.
Hi. I'm here to tell you that I'm writing a speculative fiction novel! It's about a young person who flees a dystopic city in a destabilizing empire to travel, first on bike and later on foot, to Nevada, to find a group of people she's only heard rumors about. The book is called The Horse Girls of Nevada. I've written ten thousand words so far, and I'm finishing a chapter a week. And you can read the book while I write it! I'm offering this for two reasons:
Coming July 2021 from @thedialpress ! Is it a rolicking train memoir that totally romanticizes early 2000s punk culture? Yes. Is it also a treatise on the power of forgiveness? Yes.
In September I had the pleasure of spending a week at the ghost town turned freaky queer artist residency of Cisco, Utah ( @bigtroublelittlecisco ). It was one of the more aesthetically sublime experiences of my life. Eileen and pals have made so much magic from junk and trash on the high desert plain, where the only thing that grows is cheatgrass and the wind blows ceaselessly. And where the light is always perfect. In Cisco I felt as though I was outside of time, or in the future. I was thinking of Cisco today, and that perfect light, and figured I'd post these. Maybe they'll make u feel good the way they make me feel good.🌌
In light of the recent spike in covid cases (2,000 or so new cases a day in Arizona rn 😬) and the fact that so many of us are still stuck at home, I've decided to offer my PCT 101 online course at a special rate again- this course is normally $100, but the covid rate is $0 to $300, sliding scale! You can literally pay $0 to access all the content, if that is what makes it accessible to you. I'm serious! Just 30 spots available, so sign up soon! More info: