We’re a ship. We’re a ship that’s lost on the black, stormy sea, and we’re being tossed around by the waves. I’m sitting up in my sleeping bag in the pitch black gripping one side of the tarp with all my might and Kodak is gripping the other while the most insane winds pound us and buckets of water run down the sides. The noise of the storm overwhelms my senses in the heavy darkness and then zip! Three of the tent stakes are ripped from the ground and the tarp flies out of my hands and the sky cracks in half with lightning and we are plunged directly into the cold black sea. Kodak leaps up and races into the storm while I gather the loose tarp edge and wrestle it back to the ground, leaving our sleeping bags only partly soaked. It’s so good that it’s not colder, I think, as I hear the tap tap tap of Kodak pounding tiny titaniums stakes back into the ground. Kodak crawls back inside, his rainjacket drenched, and I dig my tarp from my pack and tie it haphazardly over the opening at the end of our tarp to stop the sideways rain that’s pouring inside. We scooch back down into our sleeping bags and lay on our sides, each of us gripping one side of the tarp, as the wind continues to beat us in staccato gusts.

I don’t think I sleep at all. Time collapses into the repetitive percussion of the wind and the irregular startles of rain. The night shakes our tarp as though to shake us out of it. The storm wants to swallow us. The rain stops before dawn but the angry wind continues, and I pass the sleepless hours by reading Katherine Cook’s blog posts (http://katherinerosecook.com), which I have downloaded to my phone. Katherine Cook is currently solo-hiking the Sierra High Route, the South Sierra High Route, and the Kings Canyon High Basin High Route, all in one season, one after the other. In case you’re not familiar with those routes, Katherine Cook is a fucking badass. She’s also an incredible writer- introspective and clever and great at finding unique ways to talk about nature. As far as I can tell from her most recent batch of blog uploads, she’s finished with the SHR and the SSHR, and should be starting the KCHBR from Lodgepole soon. I wonder if our paths will cross?

The wind finally gentles a little at first light, and we’re hiking by 7:15. 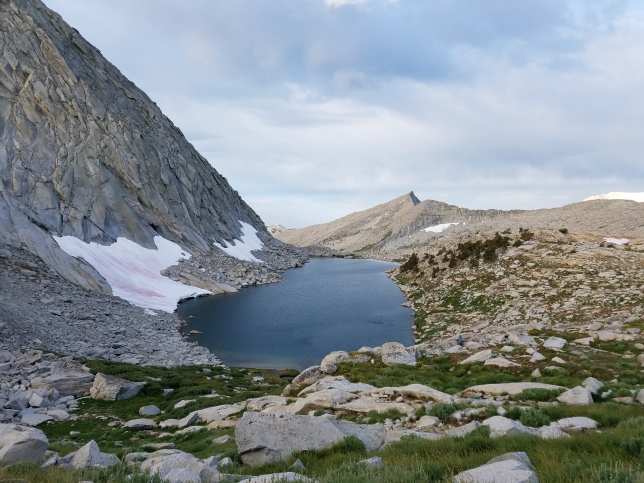 We circle Lonely lake beneath the tower of “The Horn” and climb easy slabs to Horn Col, a narrow ridge of stone where the wind reappears out of nowhere in 40 mph gusts; Kodak stands too close to the edge with his arms out, wind tearing at his jacket, and I shout at him but my shouts are swallowed by the wind.

In my imagination he is blown right off the mountain- I blink but he is still there. I scoot on my butt to the edge of the precipice, fighting with the wind. We drop down ramps on the other side of the col like super mario brothers to a seemingly random line in the talus where we hang a right- boulder, boulder, boulder, here is where I will contour. We choose different lines and then although I can see Kodak above me I am lost in my own world, consumed by the problem that each differently-shaped hunk of tilted rock or patch of wet snow presents. The next time I look up Kodak is so far above me on the slope that he’s just a dark spot on the white snow, and he’s talking to… another spot. Katherine?! My heart begins to race. I struggle over the talus, trying to get up to them as fast as I can. 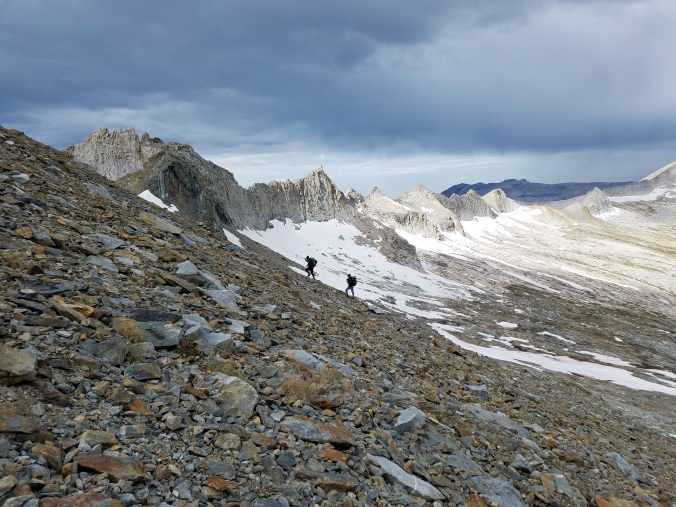 “Katherine!” I shout, but the wind carries my words away. Katherine, the only other person who we know of on this route! Katherine, who shares this world with us! Katherine, our only friend!

Katherine is wearing brightly patterned pants and all of her layers. She hiked from Cottonwood Lakes Trailhead to Lodgepole on trails, and at Lodgepole she discovered her food box hadn’t arrived at the post office, so she had to resupply at the tiny expensive store. Her maps were in her box that didn’t arrive, so she doesn’t have any, and has been navigating via the section descriptions and a large overview map (which is insane). We have two sets of paper maps between us, so I give her mine, since we also have the route on gaia. While we talk we are standing on a steeply angled snow slope being beaten by the wind, but Katherine seems relaxed and unhurried. She has also been hiking much faster than us.

I know from her blog that Katherine relishes hiking solo so, I don’t want to crowd her but, I am very excited at the prospect of leapfrogging with her for a time.

The views on the slopes of Copper Peak are insane- great upliftings crumbling with bright granite, gunmetal stormclouds on one side and on the other side a bright rainbow, arcing over everything.

We choose different lines up the talus to the summit of Copper Peak and mine ends up being a terrible route- hand over hand on too-steep scree that slides out from under me and it feels like I could die but who knows what would happen if I actually fell and the uncertainty of it has me sweating and saying oh fuck oh fuck and then Kodak (who has very generously followed me on my line after just one half-hearted “I don’t think this is a very good idea”) and I are at the narrow ridge on top, panting in the sun and the wind, and Katherine is disappearing around the corner like the rabbit in Alice and Wonderland. 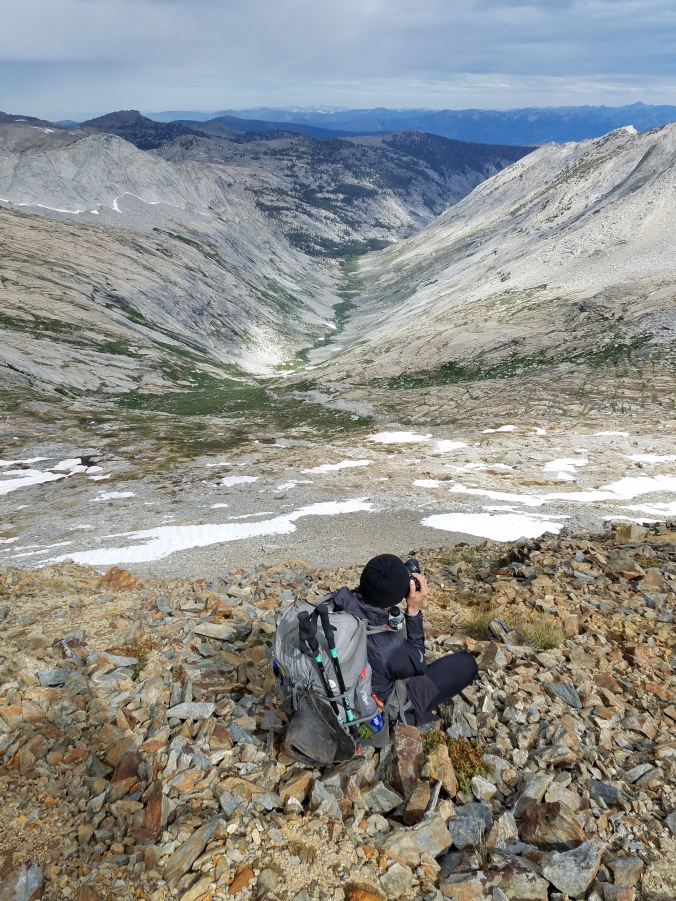 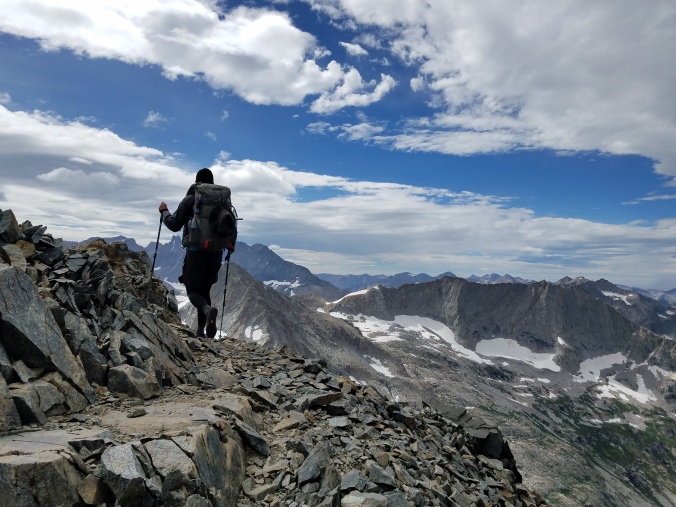 Descending off Copper Peak into the next drainage over is some steep-ass shit, shoes sliding on dirt-coated rock and here and there an embedded bit of talus to grip but not all the way or it’ll come loose from the mountain and tumble down onto your hiking partner.

Slow and steady gets me onto gentler grassier slabs, knees creaking like rusty door hinges from the sheer volume of talus and also from lack of sleep. The adrenaline of the morning starts to cool and exhaustion takes its place. Kodak and I stop at a stream to get water and eat second breakfast behind a boulder where we’re hidden from the wind and Katherine disappears around another divot in the mountain.

Some old mining switchbacks lead us downward in an organic, indirect way to cloud canyon where the walking is easy on wet grassy tufts and bushes alongside the stream. We catch up to Katherine and I try not to fangirl too hard as we leap over braids in the creek and crash through the brush like blackbears.

“Where did you camp last night?” I ask her. “Which do you like better, this trail or the Sierra High Route? What’s your favorite trail?”

“The Hayduke is my favorite trail,” says Katherine, as she leaps effortlessly from boulder to boulder in a short stretch of talus.

“Oh my god,” I almost screech, attempting, and failing, to leap effortlessly as well- “That’s my favorite trail too!”

Eventually we break out of the brush and talus into legit forest, where the understory is open and clear and a Real Trail appears, the Colby Creek Trail. Kodak and I stop to rest again and Katherine waves goodbye. Kodak gives me gummy worms- he has a huge sack of them from our Winco trip and he has begun doling them out at random intervals, which greatly increases my morale.

“Motherfucking gummy worms!” I say, as I eat them. Why are gummies so fucking good while hiking, and other questions that have no answers.

The Colby Creek trail takes us up in the warm still sun to cross-country on gentle slabs along Pleasant creek. I listen to music and hop over the water as the route wends back and forth. The sun is doing wild things with the light and I am really starting to feel the delirium. We arrive at aptly named talus lake and stay above it on talus lest the lower talus dragons consume us and descend some more talus, talus talus talus, towards a patch of forest below talus pass. 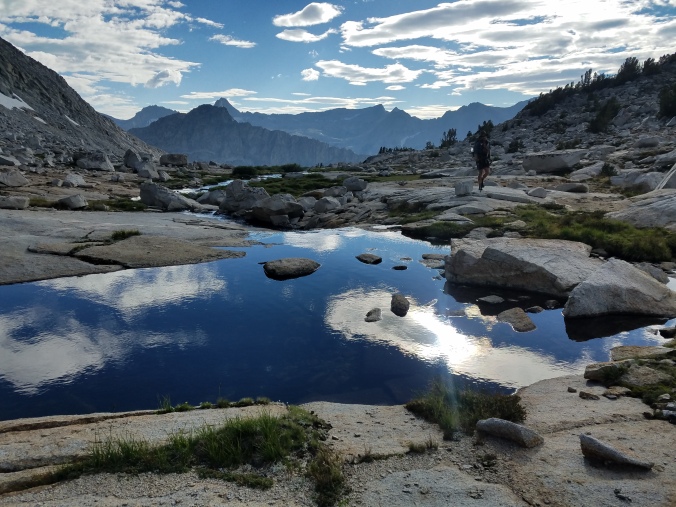 Walking on Shapes. That, I decide, is what I would call a book about this route. Imagine a huge pile of shapes. Now, imagine yourself walking on that pile of shapes. Congratulations- you’re on the Kings Canyon High Basin Route.

We reach the trees but we’re too tired to settle on a campsite and instead we just walk in circles, eyeballing various clear spots in the grass and rejecting each one in turn. I find a helium balloon crumpled in the stream. I squeeze the water out of it. It’s in the shape of a large silver “S”. I ball it up and put it in my pack. I found another helium balloon a few days ago, and am carrying that one as well. They’ll come in handy in a few days, when it’s my birthday.

None of the spots seem good enough and finally we just throw the tarp up wherever and of course the spot is perfect. Katherine is camped nearby and I walk over to tell her goodnight. Tomorrow we might end up in the same spot to camp as well, or maybe we won’t. It’s been fun having a friend for a bit.

Down here in the trees the wind is heard, but not felt. Woo woo woo it rushes over Talus pass above us but we are safe, it can’t touch us. I make my hot noodle refried bean dinner from my winco resupply, and it is incredible. We’ve set up the tarp in storm mode, just in case.