At four a.m. sheet lightning breaks the dark in half and rain rattles the tarp and I drift in and out until dawn, when the storm has mellowed to a light drizzle. Everything is packed away wet and we drop cross-country down more nice granite ramps to a switchbacking wonder of a real trail which will carry us five thousand feet to Roads End. I turn my music up and my brain off and cruise and with each switchback the forest grows warmer and then the “face flies” appear- tiny gnats that hover just in front of your eyes and if you try and smack them you will likely hit yourself in the nose. “What do you want from me?!” I yell at them, while I wave my trekking pole in front of my face like windshield wiper. I think they want to lay eggs in my eyelids and/or drink the juice of my eyeballs, but I’m not entirely sure. I keep the trekking pole waving and I don’t drink any water or eat so when we reach the concrete parkinglots of Roads End I’m in a terrible, anxious mood. We stick out our thumbs and after thirty minutes we’ve got a ride the six miles to Cedar Grove, where the snack bar is. Roads End is the official endpoint of the KCHBR, but we’re connecting it with trails to Lodgepole, its official start just south of here, and that is how we’re making it a loop. Lodgepole supposedly (according to the website) has a large grocery store, so we’re planning on buying eight days of food there, for the second half of the hike. We’ll reach Lodgepole tomorrow, and in the meantime, we can get some food and wifi at Roads End.

And that we do. We occupy a table in the snack bar for most of the day, flies circling us and landing, circling us and landing. In the bathroom there’s a sign that says “please do not bathe in the sink,” but I still wet some paper towels and scrub the many layers of zinc sunscreen mixed with dirt off my face. I am absolutely filthy- I don’t think my longsleeve desert shirt has ever looked this good/bad. Kodak gets a burger and I eat a chef salad with potato salad, a bag of bugles and then an icecream bar. We get the wifi password and bliss out on instagram. At one point the manager in the snack bar takes Kodak aside, and offers us free showers and laundry. Apparently we’re offending the other patrons with the way we smell. 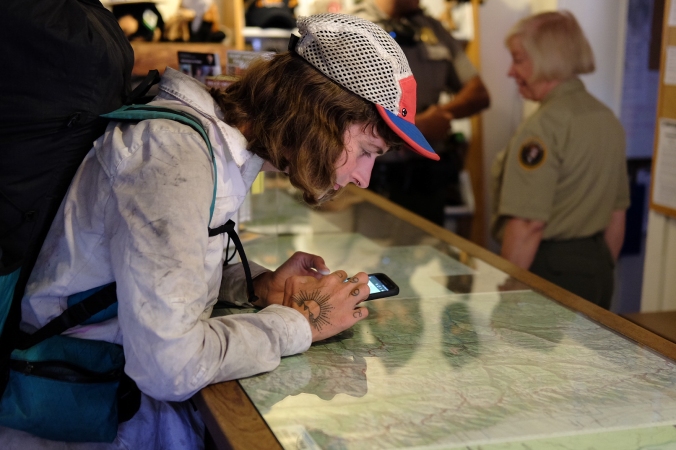 but does it go (photo by Kodak)

We wander by the ranger station to check that the trails we’ve chosen to reach Lodgepole actually exist, and then we finally hike out in the late afternoon. A three thousand foot climb on beautiful switchbacks gets us to a dirt forest service road and a beautiful view of the sunset, where we set up camp. Kodak has a vape pen he found on the ground in Washington so we smoke a little weed and I don’t get high but Kodak does, and he can’t stop tripping out about the sunset. We cowboy camp in the dust and I have lots of Feelings in my head, which is likely the beginning of PMS. In particular, I’m feeling sick of the sound of my own voice. “Why can’t I just not speak?” I think, as I drift off. What fun.