It’s 6 pm when we get a text from DropNRoll’s Delorme Inreach, which allows her to send text messages over satellite. DropNRoll, Bubs and Joey are all in a pit toilet on the north rim of the Grand Canyon. It’s 24 degrees, and the snow is falling fast. The weather forecast does not look good for the next three days. The three of them don’t have enough extra food to wait out the snowstorm in the pit toilet. Do we have access to a car?

Yes, actually, we do. We got into Kanab last night, and picked up Dan’s car from storage. Dan’s parents arrived not long after, and today we all went to Zion, only to be thwarted by the weather- freezing, dumping rain, evil black clouds, snow up top. No views, just a couple of rides on the shuttle bus back and forth, drowsy in the heat. We’re hiding in our motel room in Kanab aftetwards, blasting the heater, when we get the text from DropNRoll. Dan’s mom, Carol, gives us some sandwiches to take to our friends. Adventure time!!

A few miles down the highway, the rain turns to snow. Blowing snow, bit fat flakes. We get to a junction, and herein lies the creative bit- finding our way to the highway to the North Rim via a network of questionable dirt roads in the ponderosa forest. The first road is a rutted, tilted eroded jeep track, completely hidden under snow, and so we begin Jepping- swinging this way and that in the trees, attempting to follow the track as it winds and makes hairpin turns, going fast so as not to sink in the snow and get stuck. Dodging stumps, downed trees, washed out bits. Dan is from Wisonsin and grew up on a farm and is very, very good at this kind of driving. A few slow miles later, we pop out on the highway to the north rim. Success! The road is icy and drifted with snow, no tracks but ours. On either side of the road the dark forest stretches away. The headlights reflect eerily off the falling flakes.

After two hours of driving we reach the privy, which is at a lookout above the Grand Canyon. No views today. I pound on the door and it swings open- DropNRoll, Bubs and Joey are in their sleeping bags side by side like sardines, DropNRoll’s bag right up against the toilet. Their wet clothing is draped over the metal railings to dry. Earlier in the day, before the storm started, some hunters gave them beer. One of the beers sits on the toilet seat. The toilet paper rolls are empty.

“We didn’t think you’d actually come,” says DropNRoll. They are SO STOKED to get out of the storm. We hustle everyone’s gear into the car and crank the heat, and begin the long snowy journey back to town. It’s 11 p.m. when we pull into the motel, and we crash so hard.

The next day we have better luck with the weather in Zion, although the forecast at 9,000 feet, where the North Rim and the Kaibab Plateau are, continues to be awful. Zion, though- Zion! One of the best soft sunlight/steep canyon walls/hazy greenery/gentle rushing water combinations I’ve ever seen. Enchanted dreamland! Also, some of the most intense crowds. But I don’t mind. Another temple, another diverse demographic of people from all over the world who wouldn’t normally know how/be able to to get out into nature, come to worship. It’s fun to meander around with Dan and his parents Carol and Pat, checking out the various waterfalls and magical leafy clearings and clusters of castle-like towers with very spiritual (albeit Mormon) names. At one point Dan and I sprint to the top of Angel’s landing- the last half mile being such intense exposure on sandy tilted slicrock that if one were to stumble a bit one would fall two thousand feet to one’s death. Except! The park service has installed a heavy length of chain along this entire half mile, and as long as one keeps hold of this chain, it’s not actually possible to fall. Which makes the scramble really fun! And once on top the views are incredible, my favorite stormcloud/hazy sunlight in the canyon combo. A cold wind picks up and fat, mangy little chipmunks swarm our feet, picking broken cheez-its from the slickrock.

The third day is Get Everything Done Day. Our second round of caches are in Dan’s car, and we need to prepare them for burial. DropNRoll, Bubs and Joey need to cache in the same places we do, so we decide to join forces and go on an epic caching adventure together, at the end of which we can drop them off at the privy where they camped. First, the whole gang of us heads out, in two vehicles, to a wee slot canyon just outside of town so that Dan’s parents can see more of Utah canyon magic before they leave. There’s a two mile slog on a jeep road in the deepest sand imaginable to the canyon, and we manage to drive half of it before parking the cars (both 4wd) and walking the rest of the way. In the slot canyon Bubs and DropNRoll and Joey demonstrate their mad ascending-smooth-vertical-slickrock-walls-using-just-your-feet-and-butt climbing techniques, and my mind is officially blown. I am not a rock climber, and I had no idea, before the Hayduke, that this kind of climbing was a thing. Like, imagine a vertical slickrock wall with no handholds or footholds. Now imagine an identical wall opposite. It’s possible to climb up these walls, all the way to the top of the canyon, just using your butt, back, and the soles of your shoes. Amaze!

It threatens rain while we’re in the canyon. We get back to the cars, only to realize that they’re stuck in the deep sand, like one would get stuck in snow. No worries, Dan and his wisconsin dairy farmer parents are all professional snow drivers, and after a series of false starts, a group pushing effort, some wild careening through the sand at top speed (“It feels like we’re watching a movie,” says DropNRoll, as she and Joey and Bubs pass around a day-old bag of microwave popcorn in the backseat) we are finally out and at the trailhead. The rain begins to fall, and we say goodbye to Carol and Pat back at the motel. They have a drive back to Vegas, and then a long flight. Godspeed!

Our first cache spot is only an hour drive on good roads, and once that is successfully planted we climb in elevation towards the North Rim highway, with plans to get as far as we can tonight, camp, and then set the cache in the morning. We reach 7,000 feet, and all at once we’re in a snowy wonderland. Snow blankets the ponderosa forest, snow drifts across the road, snow falls in earnest. DropnNRoll checks to forecast- highs in the 30-40s, cold rain and snow. For the entire next week. Fuuuuck! We decide not to camp in this weather, between cache runs.

We get a room at the Jacob Lake motel just after dark. Our room has Heat and Big Soft Beds and a paned window that looks out at the snow. Are we really going to hike in this? I think, as I drift off to the white noise of the heater.

We wake up to fresh new snow and a cold blowing wind. We head out on backroads in Dan’s car to set our last caches- the original plan being that we set our caches and then drop off DropNRoll, Bubs and Joey at the privy on the North Rim where they were taking shelter from the storm. But when we get to the privy after setting our caches, the conditions are even worse- six inches of snow, snow still falling. It’s 27 degrees at 2 pm. We all shiver back into the car. We’ve got three-season equipment for three-season hiking, and the high today is 27 degrees. 27! We drive back to Jacob Lake, feeling bummed. In the lobby we sit in front of the fire and look at the weather forecast. The forecast for the next four days is still no good.

We decide to get a room for another night. None of us wants to, but hoping and wishing won’t make the weather change. Our new plan is to drop our friends off at the North Rim in the morning, in hopes that this will give them enough time to drop down below the rim, where the snow will turn to rain and the temperature will be warmer, before they camp. Then we’ll drive back to Kanab, put Dan’s car back in storage, and hitch back to Jacob Lake, where we’ll return to hiking across the Kaibab Plateau, at 9,000 feet in the snow and rain. I might… find a few more layers? We fall asleep in the motel room after eating lots of cheetos and watching Project Runway and Naked and Afraid re-runs. Hopefully tomorrow sometime we’ll actually be back on the trail. 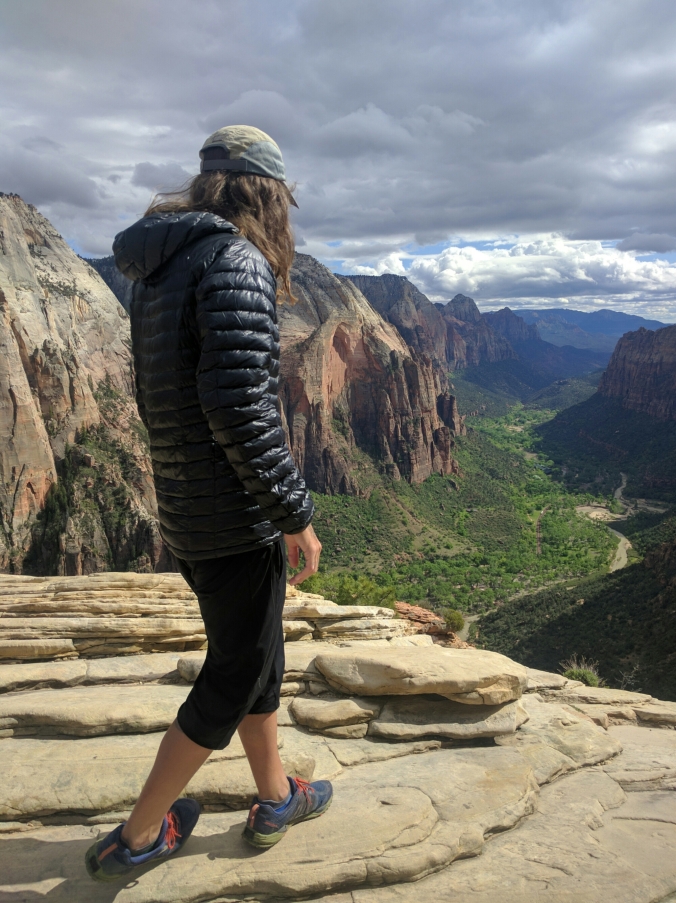 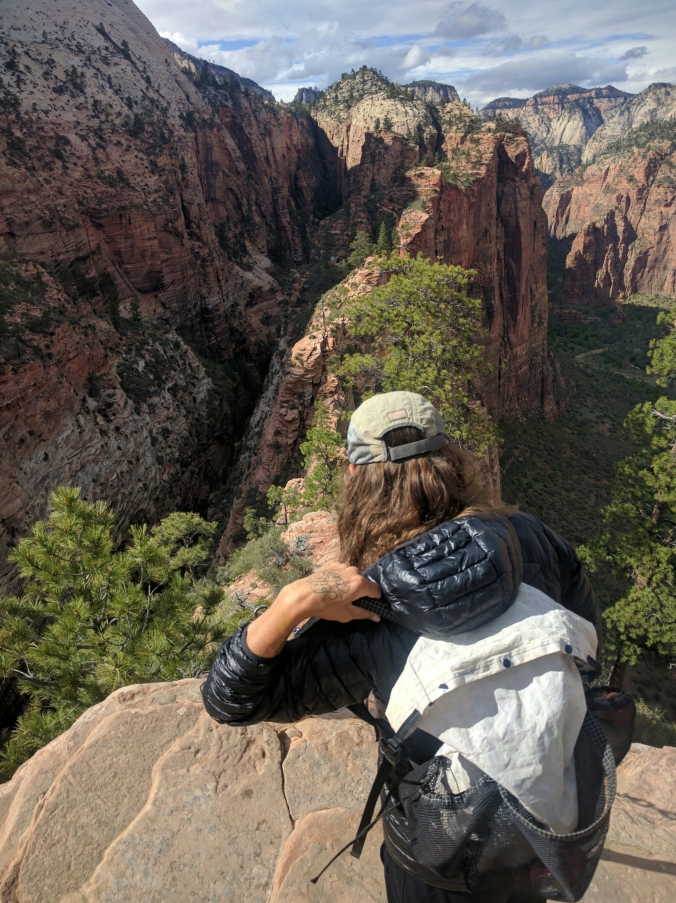 The descent off Angels landing 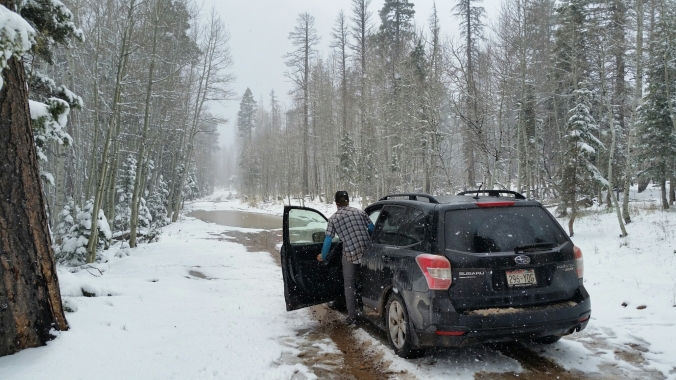 For another exciting version of events, and more photos, check out DropNRoll’s blog- http://www.drop-n-roll.com