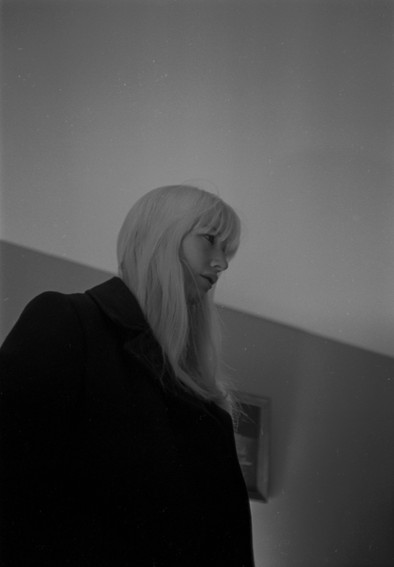 Once upon a time when I was on the internet, I found these photos of the young Annie Dillard. I don’t remember what site I got them from, or who took them, which is irresponsible, I know, but I saved them to my computer and I look at them alot. Although I have enjoyed and been inspired by many authors over the years, Annie Dillard has, over time, pulled ahead, and then passed, and then left in the dust, every single one of them, to emerge triumphant as the single greatest literary influence of my life, by a very, very large margin- like how if you make a tiny solar system all to scale, and the sun is the size of a pencil eraser, then Earth is nine feet away, and the planets behind it aren’t even in the same building. My infatuation with A.D. has maybe even evolved into a bit of an obsession, or at least a place where I funnel a significant amount of the worshipful feelings I have towards books, the written word, and sentences in general. And as I learn more about myself, I start to understand more and more why her way of thinking and writing speaks so intensely to me- her achingly florid, densely poetic, and brilliantly philosophical nature-writing tastes, to me, the way chocolate-covered bacon should taste, unless you buy it from the Alaska state fair like I did this summer, from a stand called “pork lickers”- like the best thing in the entire world. And as I think about her, I am reminded of how I was ever introduced to her in the first place.

I had a lover once who lived in a big, rambling punk house on Skidmore street, the kind of house where no-one is ever home and there is bad, half-ironic goodwill art on the walls, and all the heat is lost to the high, high ceilings. This lover lived in a room that faced the street, with big tall windows and a gleaming wooden floor, and she had hardly any stuff- a futon on the floor, a little stereo, a stack of books, some postcards lined up on the windowsill. I’d met her at a birthday fire in a friend’s backyard, and we’d courted in the Trader Joe’s dumpster and along brambly shores of the Willamette below the OMSI, picking toxic (in retrospect) blackberries until our hands were covered in juice and blood and then kissing while The Portland Spirit pulled up to the dock and tourists disembarked along the ramp above our heads. She was the sort to run hot and cold, the sort who might skip town at any moment, more unpredictable, even, than I was. She would stay up late, driven by insomnia, and then the next morning bike a “century” to the coast and back- a hundred miles in a day, with only a banana and a bottle of water. She drank too much, couldn’t keep jobs, fell asleep in strange places without even a pillow, and was devilishly goodlooking. We got off on passing as boys together, on looking like young fags. I took her on her first train ride- along with my housemate at the time, Kristi- the three of us rode the train south to Dunsmiur, California, but in the sleepy midnight hour I missed our stop among the pines and we ended up in Redding, making camp in a field full of stickers and hitching, in the hot, dry morning, back north to the historic railroad town. As we were standing on the I-5 on-ramp, thumbs out, a cop car pulled up in front of us, and the cop stuck his head out and eyed us quizzically. How old are you? He asked me, who was the closest. 23, I said. The cop furrowed his brow, confused. I got a call that there were a bunch of twelve year-old boys trying to hitch-hike, he said, before driving away.

One day I went to visit this lover at her empty punk house and found her galloping excitedly around her room, Patti Smith turned up loud, sunlight streaming in the high windows. After shouting along to Gloria (GLOOOOOOORIA G-L-O-R-I-A) she switched off the stereo and pulled me onto the front porch, where we sat on the wooden steps and she cracked open a beer. In her other hand she held a battered copy of Pilgrim at Tinker Creek, the edition with the rolling hills at the bottom of the cover, and the big sky above it. She opened the book and began to read me the part in the chapter “Seeing” where Annie is crouched along the banks of the creek, attempting to catch a glimpse of a muskrat exiting its den. The language was a little too dense for me, read aloud, and as the sentences came from my lover’s mouth they crowded my skull like furry, gently-glowing caterpillars, and I was incapable of untangling one intricate, writhing sentence before the next one landed with a THUD atop the others, waiting to be understood. But I did get a sense, that warm afternoon, that this was writing more saturated with beauty than almost all writing is capable of being- and I was immediately fascinated, if a little intimidated by the slow, thick progression of the book.

I left town, the lover left town, everyone left town, and I never did read Pilgrim at Tinker Creek until September of last year, when I packed it as my travel-book for a cross-country train trip from Portland to North Carolina, and finally cracked it open while stranded at a remote stretch of double track in eastern Oregon under the last of the punishing summer sun, next to the freeway and a tiny, ramshackle farm with a tiny, ramshackle house, a green meadow, a babbling brook, and several brown cows. I was curled on my ridgerest under a short, thorny tree whose boughs bent over and touched the dust, providing patchwork shade and a cave in which I could hide. I was sick with some parasites I’d ingested while backpacking and had only begun to treat, and for two days I waited at that siding under the strange thorny tree, alternately nauseous, dehydrated, and repentant that I had set out to take the trip at all. At night there was the deafening scream of crickets, and the ten zillion stars overhead like broken glass dropped into a well. I opened Pilgrim and read it in the punishing heat of day, and I read it by headlamp late into the starlit night. And Annie Dillard, in that moment, became my best, and only, and most important friend, my spiritual teacher- the only person, suddenly, who could tell me that everything was going to be ok, and why. It didn’t matter, anymore, that I was stranded at this siding in eastern Oregon, that I was lonely, and that no trains with rideable cars were stopping so that I could get on. It didn’t matter that I was too sick to eat, that I was almost out of water, or that I constantly had to shit. It didn’t matter because the universe was simultaneously bigger and smaller than anything I could possibly imagine, and so achingly beautiful, intricate, and astounding, that not even death could transcend it. I’ll die out here, I thought, I’ll die or reach enlightenment, one of the two.

I got out of there eventually, on the slave unit of a train bound for Hauser, Idaho, where I caught another train to Minneapolis, etc. and so on. You can read about all of that on here, in the archives for September of 08. I read Pilgrim steadily, in bits and pieces, as much as I could digest at one time, over the three-month course of that trip, adding in the first two Twilight books around thanksgiving, when I was stranded at a truck-stop in Arizona, because by that point I needed, if only for a moment, to escape to intensity of Annie’s brain, if I was to continue to absorb it at all. I finally read the last two chapters of Pilgrim this spring in Alaska, in Tara’s cabin, aloud by candlelight- and was completely stunned by them, and by the lessons I took from them, and closed the book feeling that I understood, for the first time in my life, the irreconcilably contrary nature of life on this planet. I then opened the book up and began to read again, from the beginning.

Mixed in with all of this, of course, are Annie’s other books, which I have read, or read pieces of, or which wait patiently on my bookshelf, with all the other unread books. I have sought out others who are preoccupied with her writing, I have bonded with strangers solely on our affection for it. I have slipped her into this blog almost constantly. The only thing I haven’t done, is written her a letter directly. Sometimes I think about it. The earth spins, this and that happens, time passes, Annie Dillard gets older. What if I never get the chance to be her penpal? There are other weird connections to her in my life- several of my friends went to private highschool in New Hampshire with her kid, who is my age, and rides freight trains, and other strange coincidences, all of it making the line between Pulitzer-prize winning celebrity and simple humanness a little blurred and indistinct. And what to do with all of this? What to do with the way I feel about her writing? The only thing I can think of is to read and re-read it, and stretch out the unread bits like special, finite treats, and mourn our own mortality, as humans, if only because it means that something as incredible as Annie’s writing has an end, and one day there will be no more of it.

9 thoughts on “the young Annie Dillard”