The sun at ten p.m. Can you believe it? Not setting. Just hanging out.

Debbie and I are making pemmican, which first requires making caribou jerky. So today I thawed some meat from a roadkill caribou I found in the road a while ago and cut it into thin slices and put it in this awesome dehydrator that Debbie found at a yardsale that someone made themselves, because it’s Alaska. The sides are plywood or something and the trays are windowscreen and the door is piece of glass with cabinet hinges on it. In back is a red-hot element that looks like a curling iron with a fan behind it. The whole thing whirrs loudly and fills the house with gamey damp meat smell as it dries the caribou. The dried caribou, according to Debbie, will be real fragile and crumbly, because caribous are so lean. This one was extra lean because it’s sprintime. To make pemmican you need caribou fat, too, but there wasn’t any so we’re going to use coconut oil instead, and tiny dried cranberries that Debbie picked out of the bog last fall. (All of Interior Alaska is just a giant squishy bog of miniature cranberries.) I can’t wait to have real pemmican. Then I can go off into the wildz with just my bow & arrows and a rawhide bag of flint blades and walk until I discover a new continent. But I’ll get frozen in a snowstorm instead and future-humans with giant heads and squishy, formless bodies will find me and first they’ll think I’m a boy, and then they’ll decide I’m a girl and name me “Brittany”, or something. And they’ll look in my (now shriveled) rawhide bag and find the pemmican and they’ll say- “ah hah! But who did she trade with to get these coconuts?” It feels so cool to have all this frozen caribou meat. I think I just realized today how cool it was. Like, wait a minute! I can make fucking pemmican! It’s been my fantasy to make pemmican for a couple years now. I always wanted to make it and take it on the freight train, along with these little loaves of sprouted essene bread I used to make in the dehydrator before I stopped eating wheat. I would have the best train food in the world, and then the future and the past would become one, and I would transcend everything and turn into a ball of pure white light. I’m also interested to try the straight dried meat, before we crumble it to make pemmican. In Nunavut (that’s a part of Canada, I just learned today!) people eat plain dried caribou with butter on it. People after my own heart. I love butter! 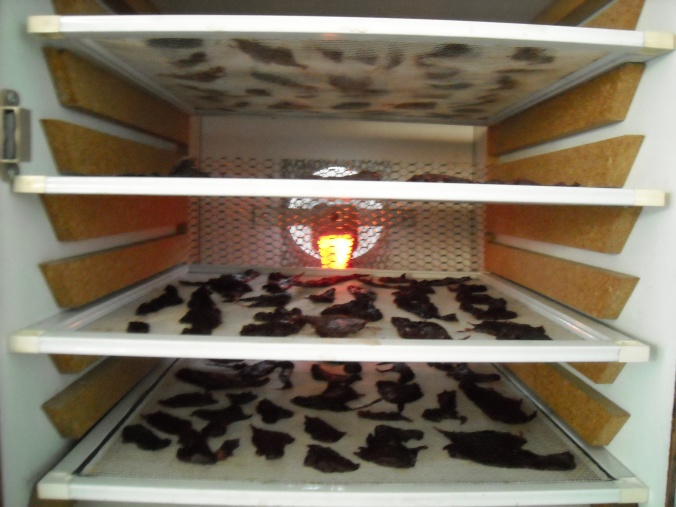 In other food news, in spite of the frequency of hot-fudge sundaes in this house, I am now able to go three days at a time without eating any sugar, which makes me feel like a strong and living human, all alive with electricity and magical ideas, aka inspiration. It is but a small glimpse of how I might feel this summer, when I leave this village and set out on my own, returning to my traditional diet of raw vegetables, brown rice, injera, and beans with too much cumin. It makes me so excited to be alive. And that almost feels wrong. Like, happiness? Isn’t that a symptom of something? Could it really be so simple? Not like, overstimulated happy, but really, simply, child-like sustainably happy? No! Who am I to deserve such a thing, when all the world is writhing in pain and torment?! How will I ever muster the innocence, the reservoirs of wonder? I turn my face to the sky and clasp my hands and ask Annie Dillard’s god, a sort of spiritual death-centered natural selection with an eye for the individual, for three good months- just three good, endless, cloudless months- in which I might finish my manuscript. Whole civilizations have been created and perished in less. Colonies of insect eggs have hatched and died in a single second.

Debbie’s parrot, on the other hand, will live to be seventy-five years old. In a cage. Can you believe it? Sometimes I think I am a miracle.

One thought on “land of the midnite ice-cream binge”